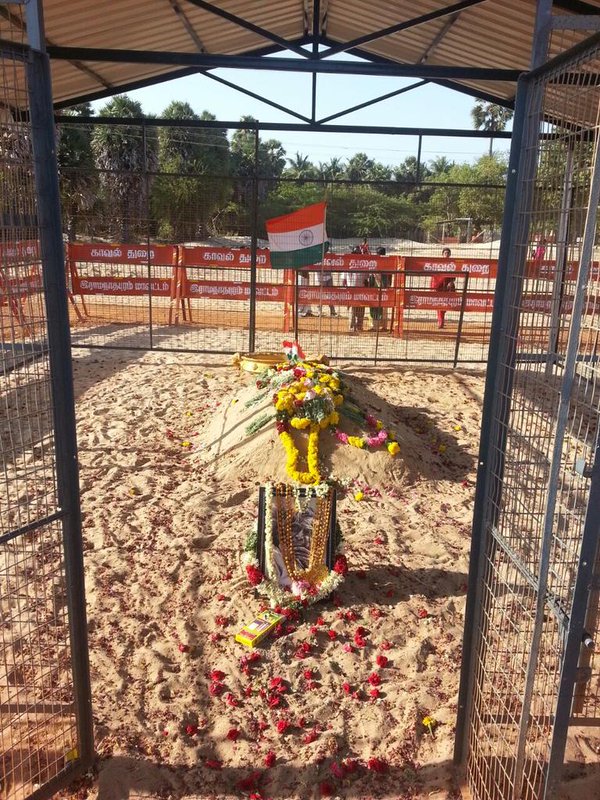 Exactly a year ago, we lost the most valuable person India ever had. Dr. APJ Abdul Kalam died after suffering a massive cardiac arrest during a lecture at the IIM Shillong. A special aircraft carried his mortal remains from Delhi to Madurai, and then taken by road to his hometown in Rameshwaram.

Even after five months, when the entire nation was still mourning the sudden demise of former President APJ Abdul Kalam, his burial site at Pei Karumbu in Rameswaram stayed neglected as the plans for building a memorial was yet to take off.
Just within a few days, plans for a proper burial memorial was laid off. The foundation stone for the construction of the compound around the proposed memorial complex was laid at a function at the site in this island. The commencement of the construction work came days after media reports stated that the place where the memorial of the former President was proposed to be built was lying neglected.
Prime Minister Narendra Modi had announced on October 15,2015, the birth anniversary of Dr Kalam, that a memorial would be built for the late ‘Missile Man’ and had requested Tamil Nadu government to allocate land for the purpose. The Tamil Nadu Government has allotted 1.30-acre land for the memorial at Pei Karumbu, where Dr Kalam was buried after his death.
And yet, no further works took place until now. It is just so pathetic to know that for a great human, who did so much for the country, the country fails to do even this little act of respect for him.
Finally now, Defence Minister Manohar Parrikar on Tuesday said the foundation stone for a memorial to former President APJ Abdul Kalam will be laid on July 27 at Rameswaram, Tamil Nadu, where his mortal remains were laid to rest.
The minister spoke after the issue was raised by Trinamool Congress member Derek O’Brien in the Rajya Sabha. “Today is Guru Purnima, a day when we pay homage to those who have taught us good things in life. Even as we observe this day, the site where Dr Kalam was laid to rest is lying in a state of neglect and disrepair,” O’Brien said.

This was met by protests from members of AIADMK, which is in power in Tamil Nadu.
Parrikar said the state government has been cooperating on the construction of the memorial.
“Tamil Nadu government is supporting what we are trying to do,” Parrikar said.

He said that delay was caused initially because the central government wanted to acquire more land for the memorial. On July 19th,he said  all is set and the design has been finalised too.

Today, marking the first death anniversary of Dr APJ Abdul Kalam, Union Ministers Venkaiah Naidu and Manohar Parrikar unveiled a life-size statue of him at his burial site in Rameshwaram and the Ministry of Defence has planned a host of events.
Previous article26th JULY – A DAY NOT TO BE FORGOTTEN
Next articleRemember This Chennai Model Who Saved A Girl From Getting Raped? The Police Claim That He Was Lying About The Whole Incident!

Ravindra Jadeja Facing The Heat Of Social Media After Boasting His Caste !!

Followed by Suresh Raina who said that it feels easy for him to embrace the culture of Chennai as he is also a Brahmin,...