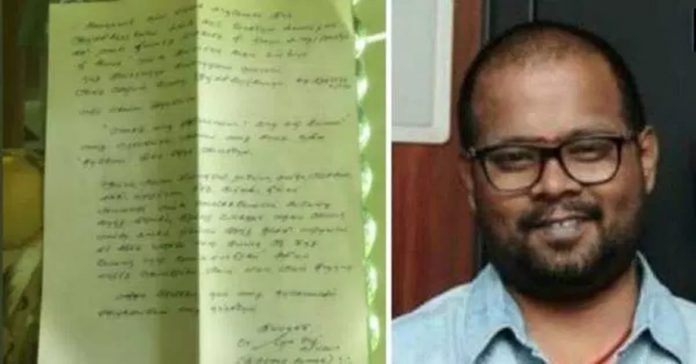 Demise of producer Ashok Kumar, has filled Kollywood with deep sorrow. Ashok Kumar, who is also the cousin brother of Nadodigal actor Sasikumar, committed suicide after being insulted and abused repeatedly by a film producer.

Following the tragic incident, President of the Tamil Nadu Producers’ Council, actor Vishal, has given a direct warning to such financiers, through his social media handle.

In the 2-page suicide note written by Ashok Kumar, he had blamed film financier Madurai Anbuchezhian of Gopuram Films for his decision. Ashok states in his letter that he had been repaying Anbuchezhian for the last 7 years and that he is not able to cope with it anymore because he was allegedly being harassed and insulted continuously.

Actor Vishal wants the police to take stringent action and consider the death to be a murder.

“I request the police to take stringent action and bring justice to the innocent’s death and also consider this as murder and not suicide,” he said.

“This is a direct warning to all financiers, likeminded people and so-called federations who extort money, more than the stipulated interest and to those who harass honest producers and family members,” said Vishal.

Typed copy of Company Productions Ashok kumar. Credit : @TamilTheHindu . Read it fully. You will understand the pain he has gone through and what a good man he is! #SaveTamilCinema #RIPProducerAshok pic.twitter.com/pZuIOnVh0d

Ashok Kumar worked as an associate producer in Sasikumar’s film company. After his death, Sasikumar, and his friends in the film industry, directors Ameer and Samuthrakani, have filed a complaint against financier Anbuchezhian at the Valsaravakkam police station in Chennai.