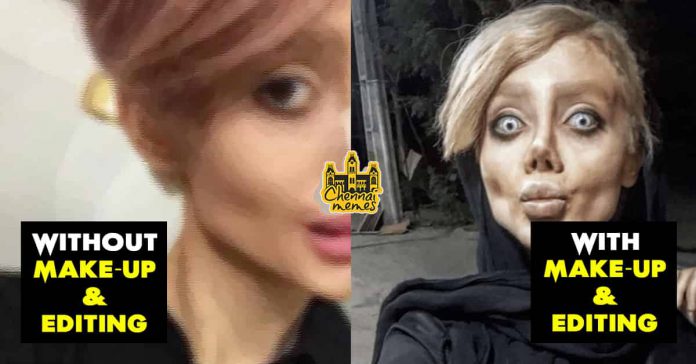 Remember the girl who underwent 50 plastic surgeries to look like the hollywood actress Angelina Jolie? Here is a  new news about the teenager!

Sahar Tabar, a teenager hailing from Iran was the talk of the town a few weeks. Many people called her a zombie and even corpse bride, the cartoon character. Sahar revealed in an interview to Sputnik, that all the pictures which went viral, claiming to her  present looks, were fake and photoshopped.

The teenager said that, “It is Photoshop and makeup. Every time I publish a photo I make my face more fun. It is my way of self expression, a kind of art. My followers know that this is not my real face.”

Tabar clarifies about the rumor which said that she wanted to look like Angelina jolie by saying that, “I did not even think about being like Jolie. Also, I did not want to resemble the cartoon character Corpse Bride. Now I understand that I have something to do with them, but I am a muse myself and remembering someone is not an end in itself.” She also added that, “I lost weight, that’s true. But I did not drop 40 or 30 kilograms, but about five or seven. Now my weight is 54 kilograms.”

“For me the most important thing in life is the approval of my family and God. This approval is, that’s enough for me” says Tabar.

The most awaited first look of "Thalapathy" Vijay's first look released on Internet and left fans of the actor go gaga. The film which...