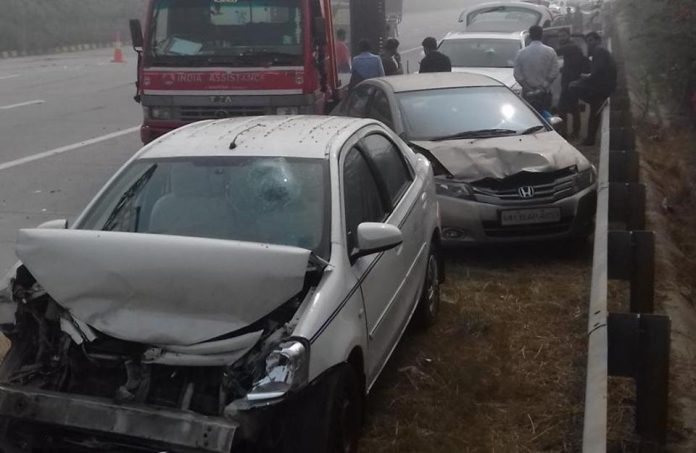 Here is the full details on today’s accident in Delhi

The deadly smog that has covered Delhi and its surrounding areas for the last two days resulted in a huge pile-up of vehicles on the Yamuna Expressway in the capital’s outskirts this morning. At least 24 vehicles were damaged and several of the drivers were injured, sources said.

Dankaur’s station house officer Farmood Ali Pundir said collisions took place on both sides of the expressway near the under construction eastern peripheral flyway where lanes have been closed and barricades have been laid.

Five vehicles on their way to Agra and eight were going to Delhi collided on the expressway, said police.

“There are reflectors near the eastern peripheral flyway, which is under construction. People could not see the barricades due to low visibility and ran over it. All the vehicles hit bumper to bumper,” he added. The toxic blanket that covers Delhi at the onset of every winter has been among the worst this year. The air quality index — which measures the concentration of toxic particulate matter in the air — has shot up to 451, pushing a top medical body to declare it a “public health emergency”.

The Delhi government has shut down the schools till Sunday and released health advisories for high risk groups, which mainly include children and the elderly.

While announcing yesterday that Delhi’s junior schools will be closed, deputy chief minister Manish Sisodia said, “I would request people to avoid morning walks. The situation is close to a severe crisis”. He had promised to review the situation today.

Here is a clipping of the accident

Fans Disappointed With This Show Of Vijay Television !!

Vijay television is very well known for the reality shows it is streaming. From Jodi Number One, Kalakka Povathu Yaaru to Bigg Boss Tamil,...