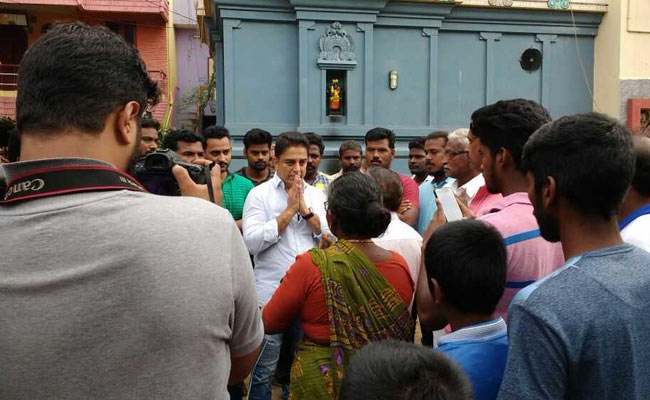 Here is Kamal’s first step into TN politics! Read to know in detail.

In the recent times, Actor Kamal Haasan has been hinting us about his entry into TN Politics. To give us a shock, the actor visited the Ennore Creek in the North Madras with a social activist Nithyanand Jayaraman. He also had a conversation with the residents and fishermen of the locality, regarding the industrial pollution and encroachments that are happening in the area. This place has not been visited by much of TN Politicians.

The Ennore creek, which drains the Kosasthalaiyar River into the Bay of Bengal, plays an important role in Chennai’s infrastructure for flood protection and water security. But the ecologically-sensitive zone is facing a serious crisis with pollutants from nearby northern Chennai thermal power station being dumped into it and as much as 1,000 acres of wetlands are allegedly encroached. He also cited two oil refineries having put up their oil terminals on wetlands.

The Vallur Thermal Plant and the North Chennai Thermal Power Plant continue to dump their ash into the Kosasthalai. Oil companies Bharat Petroleum and Hindustan Petroleum add to the problem with their oil refineries that are built on the river. “The Kosasthalai River near Chennai that has not yet turned into a drain still provides livelihood to fishermen. We have lost 1090 acres from the creek due to selfish encroachments done with no environmental concern. The Vallur Thermal Plant and the North Chennai Thermal Power Plant continue to dump their ash into the Kosasthalai,” he says. “The government has been indifferent to this though environmental activists have been protesting against these violations for years. Fisherfolk of the area working with other public are seeking to raise their voices but it’s like blowing a horn into a dead man’s ear,” says Kamal Haasan.

“I hear that the work is on to encroach upon 1,000 more acres of the creek in the guise of expanding Kamarajar Port Limited. Any state that does not give the poor the same help and priority that it gives to land dealers is like the riverbank that ignores a good river running by it. North Chennai will be flooded even if there are normal rains like last year,” warns Haasan.

Previous articleHere Is A List Of 100 Countries Whose Petrol Prices Will Shock You.. Way Lower Than India!!
Next articleYou Will Be Shocked To Know Why Georgia Refused Entry Of Indians

As soon as the trailer of Simbu starring "Maanadu" released in youtube, memes and posts linking Thalapathy Vijay with the same are flooding in...

The shooting of Nerkonda Paarvai has been wrapped up ahead of its schedule, which has made both producer Boney Kapoor and actor Ajith immensely...