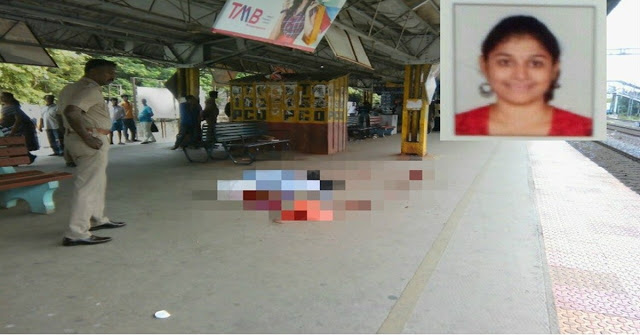 Everybody in Chennai would have heard of the gruesome murder of Infosys employee Swathi S on the platform of the Nungambakkam suburban railway station earlier today. It has triggered many debates and discussions about the lack of safety and security measures in our suburban railway stations, about the lack of CCTV cameras, and the shortage of Railway Police personnel, etc.
But beyond all that, let’s get to the root of it. I am a regular commuter who boards the 6.45 am train from Nungambakkam to Chengalpet as Swathi would. I don’t know her, but I have seen her on many days. To see her lying in a pool of blood was terrifying and horrific. From the circumstances of the murder, it seems that the cruel murderer was an acquaintance of her. I don’t understand how an acquaintance could inflict cruelty on her, whatever may be the reason, be it a relationship issue, personal enmity, family problems, work place conflict, etc. How does a person get to such an extreme state and dares to end the life of another person? Shouldn’t his conscience have told him to spare her life? Shouldn’t his upbringing have prevented him from acting the way he did? Shouldn’t his sense of compassion have stopped him? Shouldn’t his education have made him think the better of it?
This is my appeal to all parents of male children. Dear parents, it is your important responsibility to raise your male child in such a way that he lives a compassionate and peaceful life, without inflicting suffering upon others. Stop advising your ward to learn B.E or M.B.B.S. Stop prodding your ward to earn more than your neighbor’s son. Stop asking for dowry. Rather, urge him to have compassion towards others and love his friends and siblings unconditionally. Nudge him to refrain from anger, aggression, and violence. Tell him about the pain you underwent when delivering him. Make him understand the value of a life. Ask him to donate blood. Let him realize the value of each drop of blood.  Show him the way of life that others will be proud of.
-Muthu Veerappan, software professional