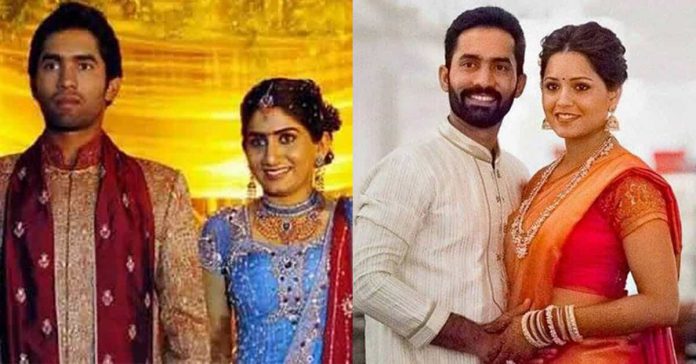 Here Are 6 International Cricketers Who Has Married Twice The former  cricketer, who played one test match and six ODI’s for India. He was married to Shabnam (Yuvraj Singh’s mother) but later divorced her. Now, he is married to Satveer Kaur and has two children with her. His career in cricket ended due to an injury, after which he started acting and has appeared in many Punjabi and Bollywood films. This wicket-keeper-batsman of Indian cricket team was earlier married to Nikita Vanjara, who fell in love with Murli Vijay (another Indian cricketer) and got divorced from Dinesh. Then in 2015, he tied the knot with an Indian squash player Dipika Pallikal Karthik in Chennai. He is one of the most controversial players from India, who was initially married to Naureen and had two sons with her, namely Asad and Ayaz. His first married got dissolved in 1996 after he fell in love with Bollywood actress Sangeeta Bijlani. But their marriage also ended in a divorce in 2010. This former Pakistani cricketer was earlier married to a psychologist, Huma Mufti. They tied the knot in 1996, but unfortunately, she died due to multiple organ failure in 2009. In 2013, he started a new life by getting married to Shaniera Thompson, a former public relations consultant. They are now blessed with a baby girl Aiyla Akram, who was born in 2014 in Melbourne. It is said that he was earlier married to a woman named Ayesha Siddiqui before getting involved with Sania Mirza. Apparently Ayesha filed a case against him after he married Sania Mirza in 2010, claiming that they two had married in 2002. After this controversy, he officially gave her a divorce and settled everything between them. He is a former Indian cricketer, who was initially married to his childhood friend Noella Lewis. But, their marriage didn’t last long as he got involved romantically with former model Andrea Hewitt. After their divorce, he got married to Andrea and now they are blessed with a child named, Jesus Christiano who was born in June 2010.

Previous articleHere Is the Full Details About Amrutha Sarathy, The Woman Who Claims To Be Amma’s Daughter
Next articleList Of 8 Places In Pondichery You Can Go Full On Shopping

After becoming the Chief Minister of Tamil Nadu, M.K.Stalin has been keeping up his electoral vows. He has started implementing them without any delays....

Fans Asking Sachin Tendulkar To Give Credits To Vijay Shankar !! Check Out Why !!

India continued their winning streak against Pakistan in World Cup matches - the Men in Blue have now won all seven of their matches...