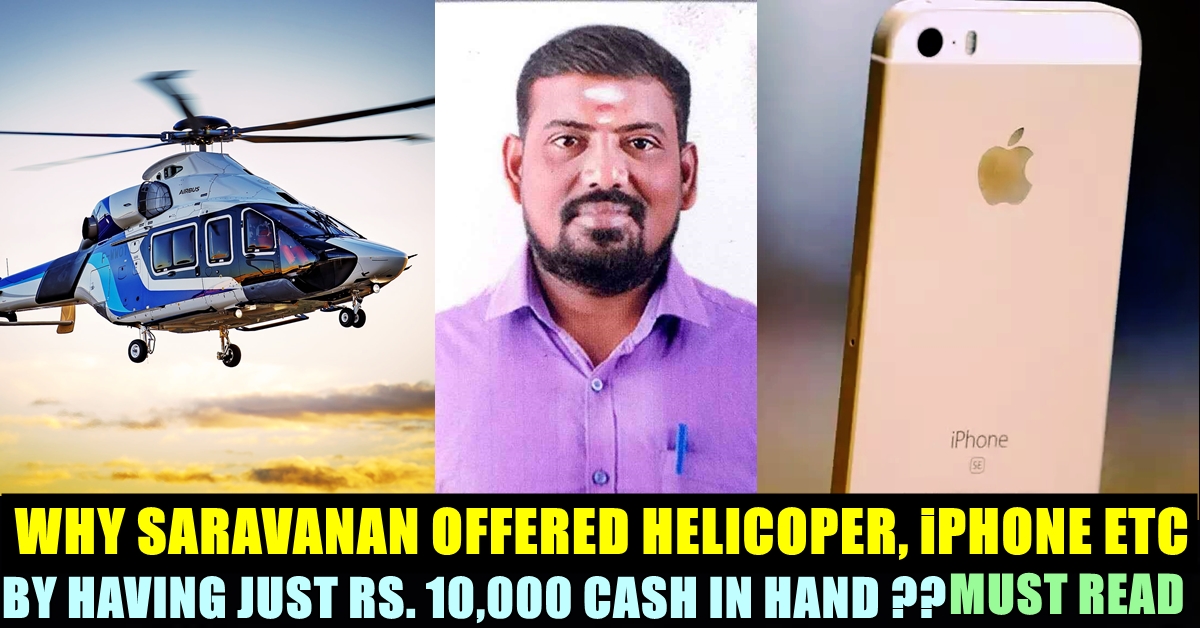 Tamil nadu assembly election is nearing and all the political party members in the state are encouraging citizens to vote for the symbol of their respective parties. Campaigns across the state are being progressed with political party leaders making various kind of promises on the developments of the state to make people vote them to the power.

With harsh words being exchanged between the different political party leaders, a number of promises made by an Independent candidate named Thulam Saravanan has garnered the attention of the voters. He who is contesting in South Madurai constituency has promised to give helicopter for every home. He also promised to provide a 300-ft iceberg to keep the constituency cool, a 100 day trip to the moon, a robot for housework and more.

The candidate, through the list of promises says, that he will deposit Rs. 1 crore in the bank accounts of every family if he gets voted to the power. Along with the mini helicopter, he also promised 100 sovereigns of Gold for women when they are getting married and offered Rs. 1 crore for youths who are willing to initiate business. A three storey house with iPhone for every individual also took place in the list of his promises.

Apart from the above, his promises includes a boat for every family, a space research centre and a rocket launch pad. A 20 lakh worth car for every house is also included in his promises. Rs. 10 lakh for every specially abled personality was announced by Saravanan.

The poll promises of Saravanan has gone viral along with the aspiring politician’s symbol “dustbin”. “Nermayin Chinnam Kuppaithotti” (Symbol of honesty is dustbin) says his election posters which are also going viral in social media platforms. However, the 33 year old said that has Rs. 10,000 cash in hand and Rs. 2000 in the bank, according to The News Minute.

The Independent candidate has said that he wanted to create awareness among the people of Tamil nadu about freebies offered by politicians during the election time. “My intention is to create awareness among people who are falling for freebies offered by various kind of political parties. I want them to choose good candidates who are ordinary humble people” he reportedly said.

The youth also slammed the active political parties for not working towards the welfare of the people. “Political parties are trying to lure people by throwing money at them and not letting them to decide properly” he vented out his emotions. It is reported that Saravanan took a loan of Rs. 20,000 for the election expenditure.

While his friends and relatives are helping him to spread the message, Saravanan said that his Whatsapp message went viral and people started to think about his message. “This is my victory, though I may not win” he said according to reports. Saravanan is working as a reporter with a newspaper and says that he chose dustbin as his symbol for a reason.

He said that he chose dustbin in order to get rid of the garbage such as bribery and corruption in our state. His promises has caused various kind of reactions in social media platforms where many people understood that he is clearly mocking the political parties who are offering freebies. However, few who couldn’t get the actual intention of Saravanan are actively spreading his promises in Whatsapp.