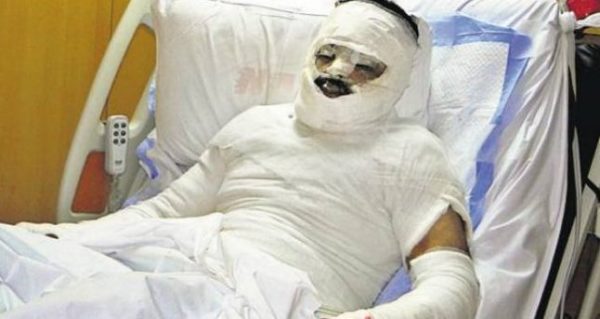 Heights Of Inhumanity! Woman Throws 4 Litres Acid On Doctor And The Reason Is Shocking!

admin
May 23, 2016
Share
Facebook
Twitter
Pinterest
WhatsApp
Another inhuman act! A woman threw 4 litres of acid on a 28-year-old vet doctor in Ghaziabad’s Vaishali area on Monday. Amit Verma, the victim, sustained 40 percent burn injuries on his arms, abdomen, chest and face and was admitted to the nearby hospital immediately. Currently, he is in a bad state and is kept under observation.

Reports say that the reason behind this attack is a failed relation between the accused and the doctor. Dr. Verma addressed this 40-year-old woman (the accused) as ‘Aunty’ and stated that she was very interested in having an affair with him. However, as per reports, the doctor had already rejected her proposal. Being infuriated over this rejection, she barged into Dr. Amit Verma’s clinic in Vaishali area around 8AM and threw a bucket full of acid on him.

At present, he is admitted to Yashoda hospital and is quite critical. Investigation on the same is going on!

Previous articleKnow Why Airplanes Are Always Painted White In Color?! Here’s The Reason Behind It, Check It Out!!…
Next articleAfter Freedom 251, Here’s Another Cheap Smartphone Offering! This Time It Is Just At Rs 99!

Milind Soman who is known among Tamil film audience through films such as "Pachaikili Muthucharam", "Paiyaa", "Alex Pandiyan", got married to Ankita Konwar in...

With just 4 matches to go in this ongoing IPL tournament, Imran Tahir, the purple cap winner of last season is yet to play...