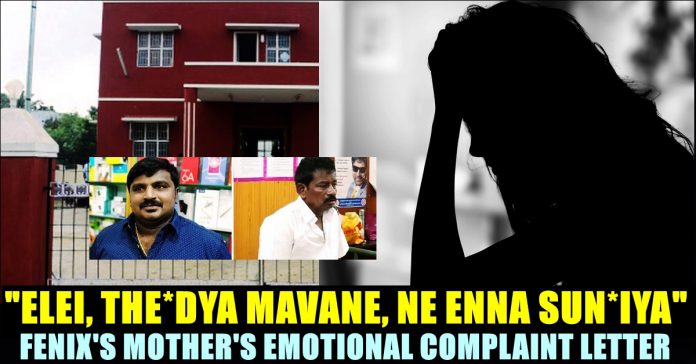 Social activist, youtuber and actor Raj Mohan released a video regarding the complaint letter of Fenix’s mother to the authorities through which she narrated the details on the confrontation between her husband, son and the police officers of Sathankulam.

Jayaraj (59) and his son Fenix Immanuel (31) were running a mobile shop named as APJ in Sathankulam town. On Friday, Jayaraj closed his shop around 8 : 15 PM and police personnel from the Sathankulam station, who were on patrol duty, reportedly pulled him up for running the shop beyond the permitted time.

The police officers visited the shop again on Saturday and had an argument in front of the public with the father and son duo. As soon as Fenix intervened the argument, police officials arrested both of them and booked cases under several sections of the Indian Penal Code against them. In her complaint letter, Selvarani jayakumar, mother Fenix has narrated the complete detail to the department of criminal justice.

Her complaint letter read “On 20th of June, around 6 : 30 PM, When my husband was in our shop, Sub inspector Bala krishnan and constable Jesuraj pulled his shirt collar shouting “Elei Thevdiya Mavane, Ne enna sunniya. .” and pulled him out of the shop. When my son and his friends asked why they are pulling his father out, the police officers asked him to come to the police station. Inspector Sridhar who was standing at the entrance of the police station, slapped my husband Jayaraj and said “Pundamavane, Police-ah ethirtha pesura”. When my son asked them not to hurt him as he was a patient, Inspector Sridhar asked the other police to beat my son along with my husband. Inspector Sridhar ordered the police officers and volunteers to break my son’s leg. They made him stand against the wall and beaten him in the backside. His skin torn and blood leaked but they didn’t stop. When my husband raised voice against it, he got beaten in the same way by the same officers. My husband and son were locked up together without clothes”

“Around 11 : 30 PM, sub-inspector Raghu Ganesh came to the station and said “Enga antha Punda makkal, elei nan yaar theryuma Komban, Komban kambu edutha kundi kari pinji odum” and beaten my husband and son till 1 : 30 PM. When I went to the station that night, my husband and son were locked up with severe injuries. When I inquired the people there, they asked me to face the case in court. After getting medical certificate, they produced my son and husband to the magistrate and locked them up in Kovil-patti sub jail. Yesterday night, I got the news that my son died in the jail. Today morning, my husband also died” her complaint further read.

Fenix was about to get married in two months and he was the only son of the family. At the hospital, doctor who checked the father and son duo, refused to give fitness certificate as their blood pressure was very high, said Manimaran, an advocate who accompanied the duo during the medical check up at 7 : 05 AM. “The blood pressures of the father and son were 192 and 184 respectively” he said.

The inspector of Sathankulam police station Sridhar asked the doctors to give a fake certificate on their fitness level. After receiving the certificate, the police took the duo on the same car to Judicial P Saravanan’s house. This incident created huge outrage among the people of Tamilnadu who are seeking highest possible punishment for the police officials. Shops around Sathankulam were closed condemning the act.

Fenix’s elder sister Perisis, after seeing the bodies on the night June 24, has said “Munnadiyum Pinnadiyum onnume illa” (There was nothing left on the front and rear of the bodies) to the reporters in Tuticorin. All the police officers of the Sathankulam station were transferred and sources reported that the police have kept Inspector Sridhar in compulsory wait.

Actress Navya Nayar, in a recent interaction with a popular youtube channel, revealed about rejecting the roles that were played by actress Nayanthara who...

Fan Wanted Anitha To Do “Bathroom Tour” !! Check Her Reply

Bigg Boss fame Anitha Sampath replied to a follower of her Instagram handle who wanted her to do "Bathroom" tour. She who is pretty...