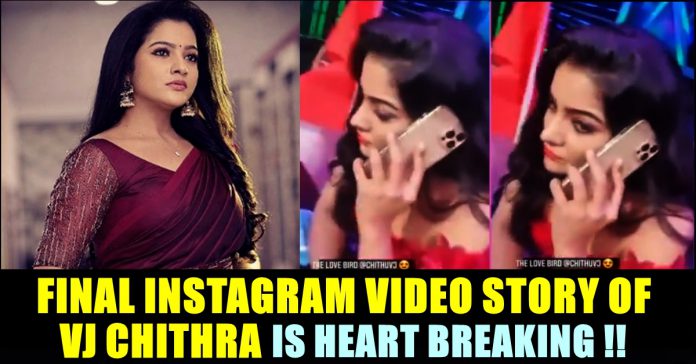 Entire Internet got shocked on hearing about the news on the demise of VJ Chithu. Hashtag “VJ Chithra” is trending in the micro blogging social media site with people posting condolence messages for the family members of the young actress. They are also questioning the actual reason behind the demise of the actress who was pretty much active in social media platforms till Tuesday evening.

Too shocked to hear that she is no more
May god give her peace in this!🙏
whats Happening in 2020#RIPChithraVJ #vjchithra pic.twitter.com/hWTdChBlEo

Why chithu ? Really sad. Gone too early. Appearances are often deceptive. I thought you were a bubbly chirpy happy girl #vjchithra

She was very active on Instagram even till yesterday. Don’t know what happened suddenly. #RIP #VJChithra #PandianStores pic.twitter.com/NpbVL2LAsh

#vjchithra was at her best in what ever she does acting, anchoring , advertising, dancing and the list goes on… Very much talented… Shocking that she took a decision to suicide… May her sole Rest in Peace… #RIPChitra pic.twitter.com/o9xyp0sfF4

Television actress Chithra, popularly known as VJ chithu or “Mullai”, committed suicide in a star hotel by hanging herself, according to reports. It is believed that she killed herself in a star hotel that is located in Nasarathpettai near Poonamallee. She was recently engaged with a man named as “Hemnath” and the pictures of her engagement were released by herself in her official Instagram account.

The 28 year old beautiful actress who has been impressing TV audience with her performance as “Mullai”, was pretty much active in social media platforms till yesterday. According to Thanthi tv , Chithu was staying in a star hotel that is located in Nasarathpettai to take part in the shooting of “Pandiyan stores” which is being held in the EVP film city, Poonamallee. As Chithu’s house is located in Thiruvanmayur, she found it difficult to travel in daily basis due to the constant rain in Chennai. She decided to stay in a hotel that is located near the shooting spot and was staying in the star hotel with her fiance.

Police officers of Nasrathpettai were informed immediately and arrived at the spot. Chithra was admitted in a nearby government hospital where she was declared dead by the doctors. Now, her body was sent to Kilpauk government hospital for post mortem. The report of Thanthi suggests that Chithra and Hemnath were involved in an argument last night.

Meanwhile, an Instagram story she shared on Wednesday night is going viral in social media platforms. In the video, we could see Chithra talking with someone on phone. Actress Sharanya who captured a selfie video of herself, shows Chithra who is sitting beside her and says “Madam Love pannalum Love pannanga, Orre busy, entha neramum phone uh” (Since the day she fell in love, she is always busy with her phone)

Chithra who realized being captured in the camera, faked a couple of expressions in a funny way. This videos broke many hearts of the fans. A fan shared the video with a caption saying “Final story of Chithra . . She was happily posing”

Sharanya wrote “Love bird” in her post and tagged Chithra. Watch the videos below :

She was happily posing . . 😭😭😭 pic.twitter.com/hBKrm6CfqS

Chithra’s engagement took place two months back and she was expected to get married in a few months. The Police investigations regarding her death is currently underway. Chithu was busy acting in “Pandiyan stores” as “Mullai”. She enjoyed a separate fan base for her looks and natural acting. In the serial, she acted as the wife of “Kathir” played by Kumaran Thangarajan. She was pretty much interactive with her fans in Instagram and was enjoying 15 lakh followers.

10 Quotes Of Swami Nithyanantha Which Is Will “SHOCK” You Right Away !!

Swami Nithyananda has an understanding of life and universe, that people like you and me can only hope to achieve. You have a doubt? You should...