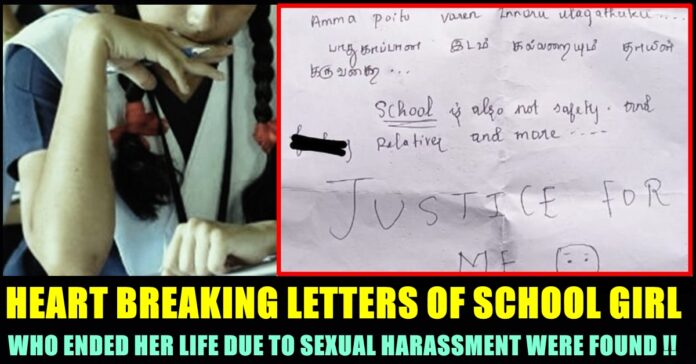 Three letters were found after a girl student ended her life due to the alleged sexual harassment she faced. Reports said that the family members retrieved the third suicide note which the deceased allegedly tore and dumped in the dustbin. No specific detail about the offended is found yet and the Police have intensified the interrogation by question the girl’s friends, relatives and teachers.

In one of the letters, the girl who was in a depressed state, wrote “A Mother’s womb and  graveyard are the places where girls could feel safe” and it created a huge outrage among the public against the harasser. On Sunday, Police conducted inquiries with the teachers of the school where she was studying and have summoned those to whom she has spoken over the phone. 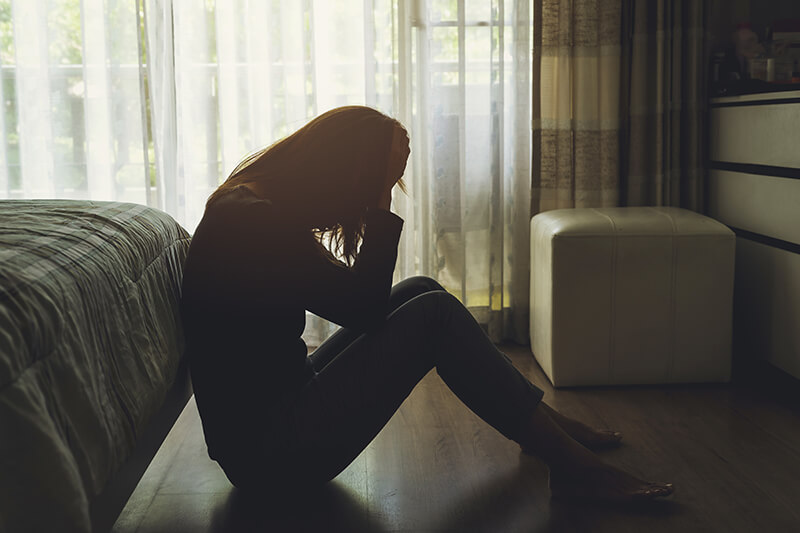 The 17 year old 11th standard studying girl was found hanging in her house in Mangadu on Saturday and the suicide notes which were retrieved from her house stated that she could no longer put up wit the pain. The suicide contained “Stop Sexual Harassment”, “Justice for me” but no identity of the harasser was found.

In the letter, the girl stated that she could neither focus on the studies nor sleep properly due to the nightmarish incident and blamed the society for being unsafe for girls. The incident took place after the girl’s mother went to a shop nearby, leaving her daughter alone on Saturday. After returning, she knocked the door after realizing that she didn’t hear from her daughter for a long time. 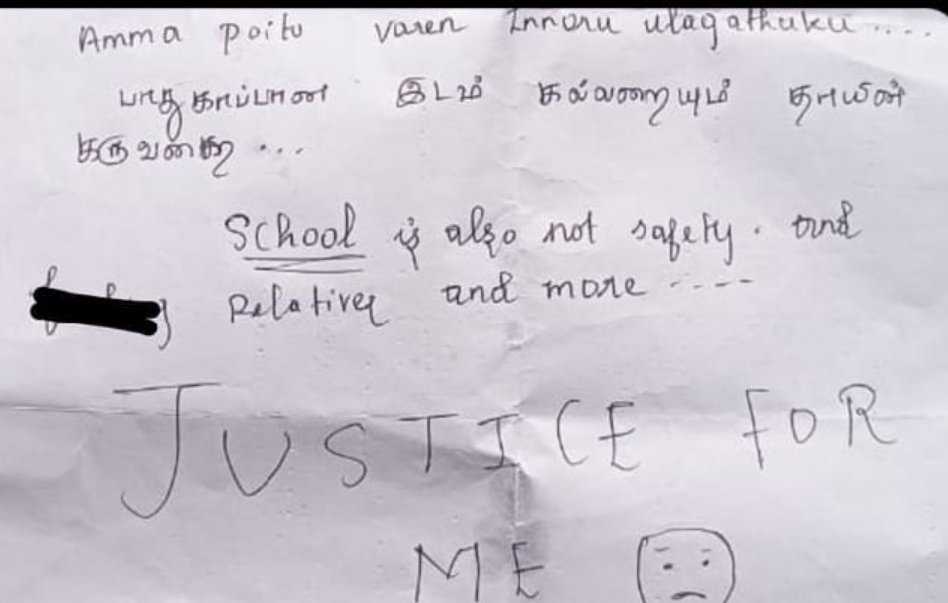 With the help of her neighbours, the mother broke the door and found her daughter hanging. Police who arrived the spot immediately, sent the girl’s body for postmortem to the Kilpauk government hospital and started their investigation. Police found that the decease stopped talking with her close friends for past few days and was talking to her new friends and was seen depressed most of the time.

In one of the letters, the girl said that she went through sexual harassment in a school tat she studied previously and couldn’t forget about the trauma. The girl felt bad about having no one to console her and blamed her parents and teachers. While searching the house, another letter was found in pieces. The girl, seemingly wrote the letter and torn it before throwing it in dustbin.

In that letter, the 17 year old said that a son of a teacher was the reason for her state and said that he shouldn’t be spared. However, no name was mentioned, according to reports. Parents of the girl said that their daughter studied in a private school from 6th standard to 9th and was transferred to Poonamalle government school due to an issue that took place in paying fees to the school. They wanted the teacher’s son to be punished.

Authorities of the school mentioned by the girl are being investigated by the Police who also checked the Cell phone of the deceased. Actions to investigate the teacher’s son is being made and a college studying student who contacted with the girl through cell phone several times is being investigated. Police requested girl students to talk about the issues they are facing in school and other public places to their parents. Approaching police trough parents will definitely give solutions, said Police and requested students not to end their life.

Previous articleNetizens Called Out This Top Hero For Romancing Krithi Shetty !!
Next articleInternet Trolls Andrew Garfield For Denying About His Presence In “No Way Home”

Jayam Ravi's upcoming film Comali is now the talk of the K-Town after the release of its hilarious trailer. Directed by Pradeep Ranganathan, the...

Madras high court laid a ban on usage of any living person’s image or drawings in banners, throughout Tamil Nadu after a resident files...