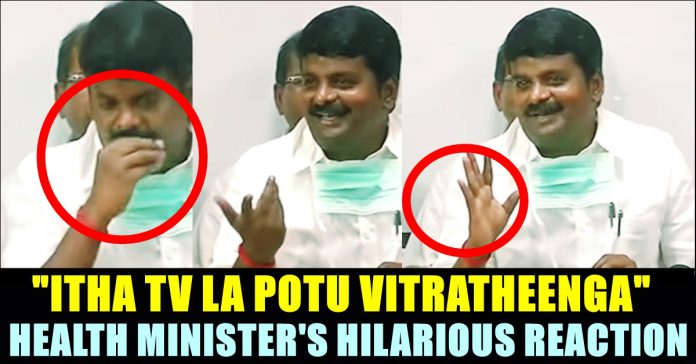 Health Minister Vijaya Bhaskar who is busy visiting hospitals and checking the facilities it contains to make appropriate decisions regarding the prevention of Coronavirus, attended a press meet to tell media the exact situation of state Tamilnadu. The minister said that there is no community spread in tamilnadu yet and hopes it never happens in the tamil speaking state. Meanwhile, the minister’s immediate reaction after coughing in between delivering his grabbed the attention of netizens.

Talking about the importance of cleaning hands only with hand sanitizer, the minister said “The sanitizer should be used by our doctors, nurses, paramedical staffs and other health care providers while treating patients. Others could use normal soap to wash their hands thoroughly.” After saying it, the minister got interrupted by cough and the reporters who were present at the hall started laughing out loud. Vijaya Bhaskar immediately reacted to it by saying “Don’t telecast this in television” and laughed along with them.

When reporters questioned about the 45 year old man who reported the first case of coronavirus in Tamilnadu, Minister said “I have told you clearly yesterday. Will tell you clearly once again. He was very well treated by our doctors and nurses and was discharged only after proper testings under central government guidelines. He was quarantined by the hospital after both his tests showed negative. He went home with proper health. I request media not to track his whereabouts. We advised him to stay away from media and he will meet you all after 14 days. Don’t have any speculations about it”

Further he also talked about how the state government is handling those who are coming from foreign countries. The minister who is also very much active in the micro blogging social media site has been updating about the state of the disease in the state. He is heaping praise for his hard work as well. In one of his recent tweet, he asked social media users to post a photo of them washing hands. The minister called it as a “I wash my hands” campaign for awareness to prevent Covid 19.

“Join with me in the #IwashedmyHands campaign for awareness to prevent #Covid_19. Post a photo of you washing hands on your Twitter/Facebook with hashtags #TN_Together_AgainstCorona #WashYourHands #Iwashedmyhands. Together we can make a difference. #Vijayabaskar #CVB” read his tweet.

Join with me in the #IwashedmyHands campaign for awareness to prevent #Covid_19. Post a photo of you washing hands on your Twitter/Facebook with hashtags #TN_Together_AgainstCorona #WashYourHands #Iwashedmyhands.
Together we can make a difference. #Vijayabaskar #CVB pic.twitter.com/XuaLb4IztK

He also reported about his visit to the Stanely hospital for inspection. “The hospital has a 31 bedded isolation ward as per protocols, an exclusive fever clinic is also setup.” his comment read.

Let us join hands to prevent the virus from infecting our state by following the instruction being provided by our minister !!