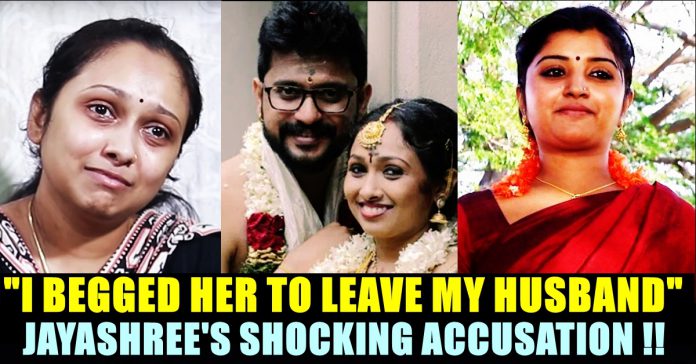 Actress Jayashree who initially rose to fame through winning the first season of dance reality show Maanada Mayilada along with dancer Sathish is deeply depressed due to her husband’s activities it seems. She is also known for her acting stints in Tamil TV serials. Now the actress has filed complaint against her husband for involving in domestic violence against her.

Jayashree’s husband Eashwar Ragunath who is also an actor in TV serials was arrested and locked up in jail as soon as the complaint of Jayashree registered. Now the actress has appeared in a face to face interview with Indiaglitz and accused actress and former video jockey Mahalakshmi for having an illegal affair with her husband.

She says that she didn’t believe it when others said that her husband has illegal affair with Mahalakshmi. But after finding enough evidence herself, Jayashree says that she begged to Mahalakshmi in her car for one and half hours to make her leave Eashwar Ragunath alone. But she came to realize that Eashwar was listening to their conversation for the whole time.

“He was asking me divorce since July end and Mahalakshmi was asking divorce from her husband since August. Son of Mahalakshmi is calling him as father and my daughter who saw it didn’t talk to him since then. I have recorded the entire incident as an evidence” says Jayashree who went on to reveal shocking behaviour of her husband.

“When I am in the kitchen, he misbehaved with our daughter which I couldn’t tolerate at all.” says Jayashree. “He got drunk and pissed on her” she added pointing at her daughter which shook the anchor who was hosting the show. “After all these I asked him can’t you differentiate between me and your mother ?” to which he they had no answer at all says Jayashree.

Watch the video of her interview here :

“I left my acting and dancing career to have a second child with Eashwar. My entire world was Eashwar and my child.” Jayashree says who was brutally beaten by Eashwar which resulted in the actress getting admitted in a hospital. After the enquiry, Police officers locked him up in jail. “However, I was only looking for compromise and I never intended in taking this into Police and media. Due to the rules of the hospital where I got admitted, they called Police and this issue blown up” Jayashree says.

It was also reported that Eashwar had sought loan for 30 lakhs by pledging the documents of Jayashree. In the interview Jayashree says that she only wants her money from Eashwar.

Man Jumped From 11th Floor Of Ship To Become Famous In Instagram !! Watch !!

In the age of viral social media challenges and outlandish stunts to gain 60-seconds of Twitter fame, a man from Washington has taken a...

Sivakarthikeyan's recently released "Don" which became a huge success box office collection wise, released in Netflix recently and to our surprise, many of the...