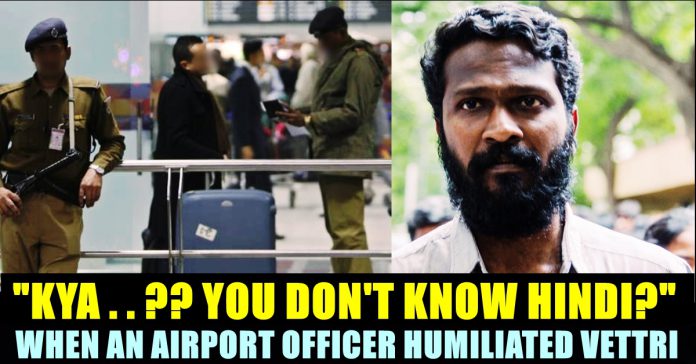 Director Vettri Maaran who is known for making socially responsible films in Tamil film industry, in a recent interview, revealed that he got humiliated at the airport during “Aadukulam” times for not knowing Hindi language. The filmmaker who has a special bonding with Vikatan magazine, revealed it to one of a reporter who went to Vedanthangal to meet him.

Vettri is currently involved in farming and in growing 600 pigeon to let them race in International level. In the interaction, Vettri who revealed that he is going to do a film with Vijay in near future, also opened on an incident where he got humiliated by a north Indian airport immigration officer.

Vettri Maaran is one of the leading directors in Tamil film industry who was highly believed to direct Vijay in his 65th film. However the director made the news as false by announcing his upcoming two films with actor Soori and Suriya respectively. His recent period drama Asuran with Dhanush became a most successful film on the year 2019 as it was lauded by both critics and audience. This made Vettri Maaran the most talked about filmmaker of the year.

The national award winning filmmaker who is considered as one of the most progressive filmmakers of our era, is known for his sensible public statements and for the stand he takes in public issues. In this recent interaction with Vikatan, Vettri revealed about his experience in Delhi airport with an immigration officer.

“During August 2011, we were returning to India after screening “Aadukalam” in Montreal film festival. At that time, an airport immigrant officer talked to me in Hindi. I replied to him in English saying that I don’t know the language. “Kya . . Kya . . You don’t know mother tongue of this country ?” he asked me. I said that the language my mother speak is Tamil. So, Tamil is my mother tongue. To communicate with others I know English” I said to him.”

“He got angry and said “You guys are all the same. You Tamilians and Kashmiris are only breaking this country. You are all terrorists.” he made derogatory statements and made me stand alone” the filmmaker added.

“Though my producer Kathiresan and music director G.V Prakash said that I am a national award winning filmmaker. he didn’t let me go. After making me stand for 45 long minutes, they let me go after another officer arrived. How my mother language would destroy the unity of our country?” Vettri asked. “How my mother tongue would stop my country’s growth?” he further asked.

“The more I can retain my identity, the more I can survive. If we have to live, we should save our culture. Acting against the culture of others is not our intention” the filmmaker firmly said.

On the work front, Vettri made it clear that he is going to do a film for producer Elred Kumar post lockdown. “After completing “Vaadi Vaasal” for Dhaanu sir, I am planning to wait for Vijay’s call sheet” the filmmaker said to make the fans of the”Thalapathy” actor o crazy.

Comment your views on the way the filmmaker got treated by an Airport officer !!

Video of a woman dancing and singing to express her frustration over Tamil nadu police officials who asked her to wear safety mask is...