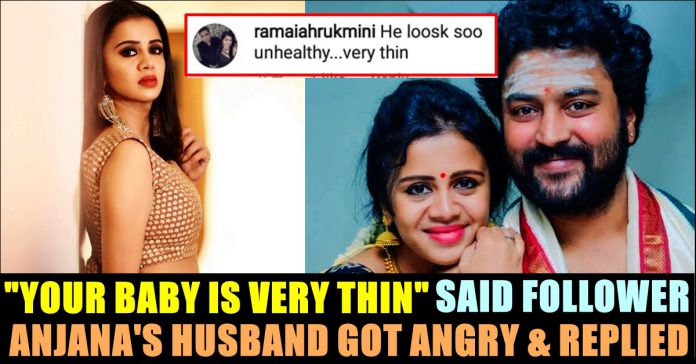 Celebrities posting the pictures of their kids in their social media accounts is common in this digital era. VJ Anjana who is very much known among the Television audience for hosting shows recently posted a picture of herself with her kid. Being a busy compere, Anjana effortlessly balancing her personal and professional which is evident through her Instagram timeline. Currently she enjoys 10 lakh followers for her verified photo posting social media account.

On 13th January, she posted a picture of herself with her kid and captioned it as “My whole ❤️ ! #kissmootales !”

Social media don’t know the value of the emotions expressed by others in online medium. Many celebrities are receiving negative and abusive comments by random social media users in daily basis. Some would post their pictures and would never turn back to it due to their intolerance of abusive comments and the other would give them back right away.

To this post of Anjana, while many people are wishing the host and the kid for a bright future, one of her follower decided to inject a negative thought in the comment section. The user said that the kid of Anjana looks so unhealthy and very thin.

This comment grabbed the attention of Anjana’s husband Chandramouli who is known for acting as protagonist in Prabhu Solomon’s Kayal. He replied back to the follower right away. The actor, in his reply comment said that people’s belief in chubby kids are healthy and kids who are thin are unhealthy is just a myth. The comment was deleted now but the screenshot of it was doing rounds in social media. Check out it below :

Actor Chandran and VJ Anjana Rangan have welcomed a new member to their family few months back. They turned proud parents to a baby boy which made the anchor to take a break from her professional career. The couple named their son as Rudraksh. Anjana who enjoys quite a huge fan following in social media due to her unique way of anchoring in Sun Music as video jockey, did shows for the music channel for nearly 10 years. Now she is also started hosting audio launches and movie functions.

Meanwhile actor Chandran is awaiting for the release of his “Party” directed by Venkat Prabhu. His “Thittam Pottu Thirudura Kootam” released in theatres recently with average reviews. What do you think on this reply from the actor ?? Comment your views below !!

Ajith Kumar’s Unexpected Gesture After Drinking Tea With This Family In Their Hut !!

As Ajith Kumar celebrated his 49th birthday yesterday, many stars shared their most memorable moment with the actor and wished for his birthday. Starting...

Director Vignesh Shivan who is about to direct actor Ajith kumar in his next film, is getting trolled by a number of online users...