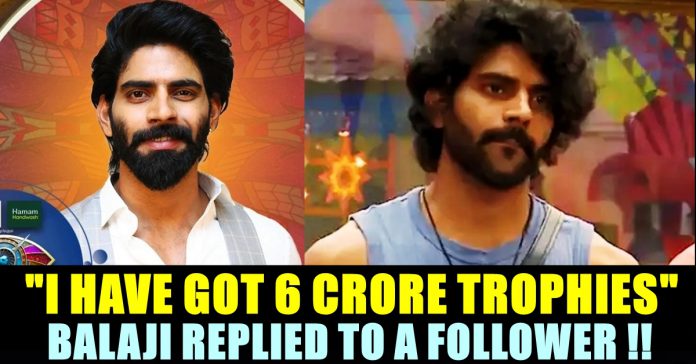 Season 4 of Bigg Boss show ended with Aari Arjunan winning the title and prize money of Rs. 50,00,000. Balaji became the runner up and Rio grabbed the second runner up spot. Kamal Haasan, before announcing the title said that the winner received 16 crore votes from the audience and runner up got 6 crore votes. Balaji Murugadoss, one of the most talked about contestants of the Bigg Boss show referred the statement of Kamal Haasan while replying one of his followers.

Now, a viewer of Bigg Boss show asked one of a supporters of Balaji why she is supporting him. “Why are you supporting Balaji ? He is being arrogant af, do you think he deserves support ?” he asked and received a reply saying “he is an incredible man and I really like his character, he is not afraid to say what he thinks. I love him”

On seeing this question from the viewer, Balaji himself replied to him through his official Instagram account. The aspiring actor said that it is not arrogance but self confident. “It is the confidence that a man has on himself” said Balaji by writing “Athu Arrogance illa Nambikkai bro, Than me oruvan konda nambikkai”

Check out the screenshot of his reply below :

To another fan who expressed her/his love on Balaji, the model replied saying that he went inside the Bigg Boss house only to be himself. “I never went inside to show that I am a good person. I entered the house only to see if you people like me as Bala. For that I received 6 crore trophies.” said Balaji in his story and added that people accepted him as a good human being. “This is enough for me throughout my life” his story read.

“NA NALLAVAN NU PERU VANGA ULLA POLA, NA BALA VA IRUNDHA UNGALUKU PIDIKUMA NU PAKA DHAN PONAN! ENAKU KADACHATHU 6CRORES CUP! I SPOKE WHAT EVER IS THERE IN MY HEART NEVER HIDE ANYTHING, YET YOU ALL LOVED ME. I ALWAYS HAD A DOUBT WHETHER I’M A GOOD HUMAN OR BAD HUMAN BEING ! I GOT THE ANSWER NAN NALLAVAN ADHU NEENGA SOLLITINGA LIFE LONG IDHU ONNU PODHUM ENAKU” the story Balaji added read.

Previous articleNorth Indian Fans Slamming The Wrong Tim “Payne” !! His Reactions Are Hilarious
Next article“It’s Not Me, Report The Video” Anikha’s Clarification On The Viral Video !!

Tamil Cinema Mourns For The Demise Of KV Anand !!

Lokesh Kanagaraj, director of Vijay's most awaited upcoming film "Master" has appeared in an interview to promote the film for the first time. The...