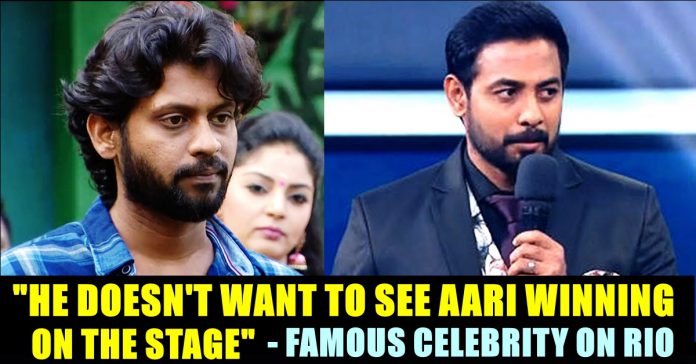 Music composer James Vasanthan who has been letting his followers know about his thoughts about the ongoing Bigg Boss show, lately came up with a write up alleging that Rio doesn’t wants to see Aari winning the Bigg Boss trophy on stage. He said that Rio looks devastated since knowing about the status in the outside world regarding Aari and added that Rio wants to get out of house with Rs. 5 lakh cash only because he doesn’t wants to see Aari holding the trophy.

James vasanthan, an ardent supporter of Aari, has been campaigning for him through his social media platforms. On Friday noon, he came up with a Facebook post saying that Rio’s true nature got exposed in past two days. He said that Rio approached Aari three days ago and advised him to be cool. “But he got absconded from then and people are searching for him till now” James said in his post.

“It was consoling to see Nisha questioning Rio why he is looking so dull on behalf of us.” said James and pointed out how Rio asked Gabriella to give him the 5 lakh suitcase. “Where did his love and affection towards Gabriella go ??” James asked through his post.

Further James said that Rio looks upset on imagining the finale that is going to take place so Sunday. “He couldn’t imagine himself clapping hands for the victory of Aari during Sunday’s finale and is getting depressed. That’s why he planned to get out of the house with the money. But it failed” James wrote in his post.

“That’s why he told Nisha that he would have felt happier if he got out of the Bigg Boss house through eviction. The audience had predicted it long ago” he added. After working as an anchor for over two decades, James Vasanthan debuted into film industry as a music composer. He also started his filmmaking career in the year 2015. His film ‘Subramaniyapuram’ went on to become a blockbuster and brought him into prominence. A song named “Kangal Irandal” became a huge hit among the youngsters and his background score also lauded by the audience and critics.

As far as Bigg Boss show is concerned Aari Arjunan, Balaji Murugadoss, Gabriella Charlton, Rio Raj, Soma shekar, Ramya Pandiyan were the contending for the title. Gaby took an offer of Bigg Boss and left the house with Rs. 5 Lakh which left five of them to contend for the title. While taking the suitcase, Rio stopped her and said that he wants to see his child. He insisted on leaving the house with the money by saying that he misses his home so much.

First promo of Saturday episode showed Kamal Haasan hinting a twist in the finale result and the second promo showed the host suggesting the contestants to look the positive side of it.

As India heads for elections in a week, several questions are being raised about the Election Commission's decisions on what constitutes a violation of...

South Indian Actress Samantha came up with a note in her official social media handles, brushing off the rumours and speculations that surfaced against...