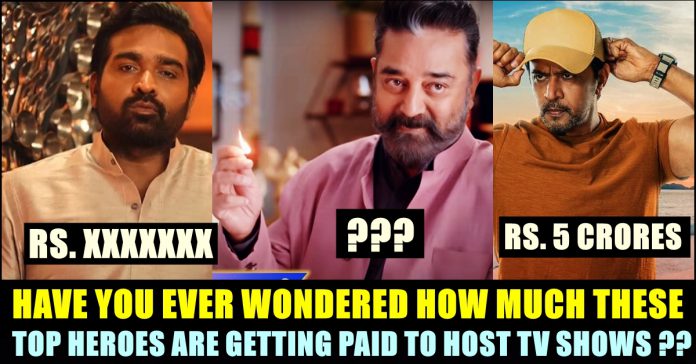 Ever since Kamal Haasan started the trend of hosting a reality show for a Television channel, many prolific stars ventured into small screen as hosts. Followed by Vijay Sethupathi who is hosting “Master Chef”, Action king Arjun Sarjah has been committed to host “Survival” that is being telecasted in Zee Tamil channel. Many other stars such as Tamannah, Samantha, Shruthi Haasan, Amitabh Bachchan, Suriya, Prakash raj hosted shows for Television and OTT platforms. Now, the salary details of Kamal Haasan, Vijay Sethupathi and Arjun Sarjah were released by a media channel.

Kamal Haasan has been hosting Bigg Boss show for past four seasons and is all set to host the upcoming season which is also going to have celebrity contestants. A recent report surfaced revealing the salary details of the actor who is fondly called as “Ulaganayagan” by his fans. Kamal Haasan is reportedly receiving Rs. 60 crore as salary for hosting the upcoming Bigg Boss season.

The actor is getting Rs. 4 crore to host each episode and the reality game show would involve him for 15 weeks, including the finals. Thought he would appear in Television for Saturday and Sunday, the shooting of his episodes will be shot only one day. The actor who got Rs. 1 crore for each episode during the inaugural season, is going to get Ra. 4 crore in the upcoming season.

Vijay Sethupathi who is hosting a show called “Master Chef” for Sun Television is getting Rs. 50 lakh to host per episode, said the report. Prior, he hosted a show named “Namma Ooru Hero” for the same channel and is currently hosting the cookery game show. The actor is also involved in a 15 crore project of Sun Tv. It is notable that the satellite rights of his “Laabam”, “Tughlaq Darbar” were bought by Sun television.

Arjun who is hosting the show named “Survival”, has been committed for Rs. 5 crore, says the report. Apart from that, Zee Tamil has been planning to buy the satellite rights of his production ventures which is going to feature his daughter.

Some of the popular faces such as Vikranth, Nandaa, Lakshmi Priyaa Chandramouli, Besant Ravi, Shrusti Dange, Vijayalakshmi, Saran Shakthi took part in the “Survivor” show as participants. The show is slated to be aired on Zee Tamil during 9 : 30 PM from Monday to Friday. The 14 contestants who took part are aiming to win the prize money of Rs. 1 crore.

As far as Bigg Boss show is concerned, two main promos and logos were released. However, speculations on the 15 celebrity contestants are still surfacing in Internet with people expressing their wishes to rope in a number of popular names. Master Chef was originally started in Hindi language and has been extended into three languages spoken in the Indian sub-continent, including Tamil and Telugu. The Hindi version is available on Disney+ Hotstar while Tamil and Telugu are available on Sun NXT.