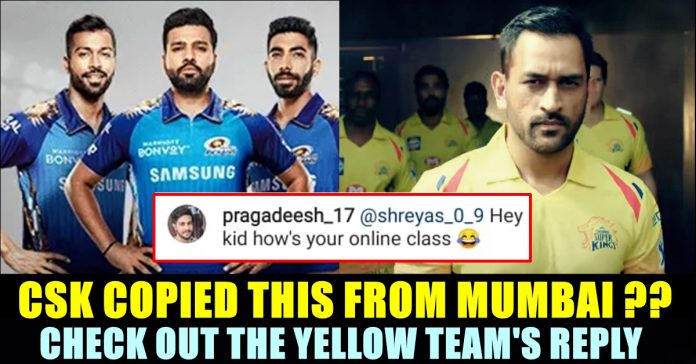 Social media accounts of team Chennai Super Kings is not only known for updating about the decisions took by the management, but also for the befitting replies to trolls and hateful comments. The most awaited IPL tournament is all set to get inaugurated in less than 10 days amidst the COVID 19 crisis. Almost all the players of every team have reached UAE and are self quarantined to participate in the tournament. As all the preparations are being made in full swing by the management, online banter between IPL teams and fans have also started taking place.

On Thursday, in the Caribbean Premier league, Shah Rukh Khan’s Trinbago Knight Riders defeated St. Lucia Zouks by 8 wickets in the final and made history in the T20 tournaments by not losing a single match throughout the season. The Kieron Pollard led team won all its group stage matches and then the semi final and final which is not happened before in any kind of T 20 tournaments all over the world. The champion team contained some of the big names in International cricket such as Pollard, Dwayne Bravo, Darren Bravo etc.

As soon as the team won, the news stormed the Internet with fans of the game cricket celebrating the historic win of the deserving team. “Ami TKR we rule. Awesome display boys…u make us proud, happy and make us party even without a crowd. Love u team. @TKRider @54simmo
and my fav @DMBravo46 well done @KieronPollard55 & my man @DJBravo47 love you how many [email protected] come to IPL lov u” Shah Rukh posted a tweet celebrating his team’s victory.

Ami TKR we rule. Awesome display boys…u make us proud, happy and make us party even without a crowd. Love u team.@TKRiders @54simmo and my fav @DMBravo46 well done @KieronPollard55 & my man @DJBravo47 love you how many now4!!! @Bazmccullum come to IPL lov u

As soon as Trinbago won the finals, along with fans, IPL teams also started celebrating the victory. Defending champions Mumbai Indian posted a picture of their team’s player Kieron Pollard and honoured him. “Pollard is a Champion!” their caption read.

Meanwhile, an hour later, Team Chennai Super Kings posted a picture of Dwayne Bravo who is also a part of Trinbago team and added a caption writing “Bravo is a Champion! 😍🔥”

Bravo is a Champion! 😍🔥 @cplt20 #WhistlePodu

On seeing the caption of both the teams, an Instagram user named as Shreyas, posted a comment on CSK’s post saying that the team copied the caption from the blue team. “Caption copied from MI” he wrote and received 392 likes for his comment so far.

Replying to this comment, the official Instagram account of Chennai Super kings said that the song was made by Bravo four years ago. “Oh, this song released in 2016. A lovely man by name Bravo sang it” read the reply comment of the yellow.

Check out the screenshot of their reply below :

As soon as the reply of CSK surfaced, fans started trolling Shreyas for his reply to CSK’s post.

Comment your views on this reply of Chennai Super Kings !!