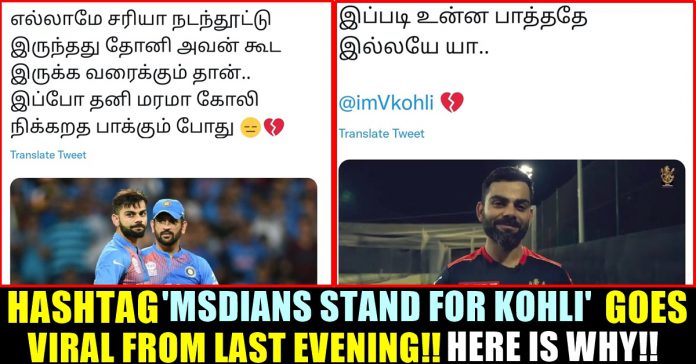 The Internet has been flooded with emotional messages to the cricket player, Virat Kohli after he announced about giving up his captaincy. Quite interestingly, Dhoni fans have extended their support to the skipper. Hashtag, #MSDiansStandWithKohli has been trending on Twitter. Many Dhoni fans have shared their message and reactions using the hashtag.

Virat Kohli to step down from RCB captaincy after #IPL2021

“This will be my last IPL as captain of RCB. I’ll continue to be an RCB player till I play my last IPL game. I thank all the RCB fans for believing in me and supporting me.”: Virat Kohli#PlayBold #WeAreChallengers pic.twitter.com/QSIdCT8QQM

IPL fans have been disheartened by this news. Everyone has been showing their concern regarding this announcement. Many have wished that Virat Kohli should lift the IPL cup this time.

I believe in @imVkohli supremacy that he will lift #RCB to their first ever title and ends his captaincy with a trophy in his cabin. 🏆

It’s a heart breaking 💔 news for us and even hard to digest 😥 but we will always with you King. 👑

Whomever lead the side you’re my captain. pic.twitter.com/fGAwi8Wd9m

No King we weren’t ready for this 😭💔 pic.twitter.com/N3QKVQlumJ

What a way to end this would be 🔥 pic.twitter.com/riHp7Qk8Nh

M S Dhoni’s fans have shown their love and support to Virat Kohli. They have also made the hashtag, #MSDiansStandWithKohli trending. Under the hashtag, fans have shared their favorite moments of Dhoni and Kohli along with messages to Kohli. Some have felt sorry for Virat Kohli and the way he is criticized.

#MSDiansStandWithKohli@imVkohli ,@msdhoni
We love u Virat
Thanks to all MSD fans for u r support ❤️🖤
🇮🇳 pic.twitter.com/WQG7vgQ3j4

Imagine
How it feels when someone trolls your friend or the one you respect most ..

It’s what your idol feels rn😊

Let it be Mahi or Virat
They don’t smile by reading trolls!! #viratkholi #MSDhoni #MSDiansStandWithKohli pic.twitter.com/csgiNgpLxa

It’s not good to see @imVkohli as a genuine Cricket fan going to miss 20-20 Captaincy.. We #MsdiansStandwithKohli #VIVOIPL pic.twitter.com/Ysogye1mVM

Previous articleTamil Actress Replied To The Controversy That Emerged Against Her !!
Next articleAmala Paul’s Reply To A Dirty Comment Of An Adult Page Goes Viral !!

Chekka Chivantha Vaanam is an upcoming multi-starer film directed by Mani Ratnam. Silambarasan playing as one of the leads in the film has recently...