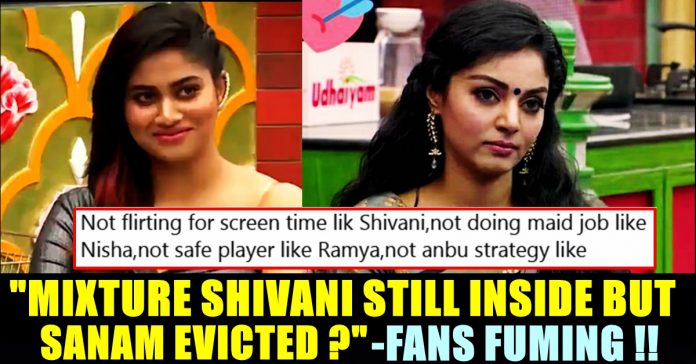 After the news on Sanam shetty’s eviction got surfaced in Internet, users of the micro blogging social media site who are following the Kamal Haasan hosting reality game show, are expressing their emotions by trending the hashtag “Sanam”. They have started questioning the credibility of the voting system of the Bigg Boss management and asked how contestants like Shivani, Aajeedh, Nisha who hadn’t done anything impressive till today got saved.

Various reports from different media portals emerged confirming the eviction of Sanam shetty. She got nominated along with Aari Arjunan, Ramya Pandiyan, Aajeedh, Shivani Narayanan, Aranthangi Nisha and Anitha sampath. This news on sanam’s eviction came in as a shock to the Bigg Boss followers as they expected Nisha or Ajeedh or Shivani to get eliminated.

Sanam shetty, a model by profession said that she has been trying to take part in the Bigg Boss show for past three seasons and always gave her best to stay inside the house. Last week, for showing her determination in the topple task, Kamal Haasan appreciated her. Sanam gained a fan following for herself by raising voice in the issues that are taking place in the house. Last week, she confronted Balaji Murugadoss while performing a task provided by Bigg Boss.

After knowing about this update, online fans who are keenly following the show, has been expressing their disappointment. Many said that they won’t follow the show if Sanam gets evicted from the it. Uploading a picture of a mixture bowl, a follower wrote “Vijay Television please send this bowl of #mixture to contestants.. Almost 60 days over they may feel shortage of mixture.. This is from my side to support them.. #shivani #aajeeth #nisha #ranesh #Som #ramya”

Popular parody account Srini Mama also said that the voting system of Bigg Boss needs to be questioned. Check out some of the reactions below :

#BiggBossTamil4@vijaytelevision please send this bowl of #mixture to contestants.. Almost 60 days over they may feel shortage of mixture.. This is from my side to support them.. #shivani #aajeeth #nisha #ranesh #Som #ramya #NoSanamNoBiggboss #Sanamshetty #Sanam pic.twitter.com/nwU1CwDXQK

#Shivani literally sleeping in Kamal sir episode and #Sanam is out

If someone as active as Sanam is getting evicted, then the Bigg Boss voting system needs to be questioned! When there are so many romba sumaar contestants still inside, why evict such a strong player? Ridiculous!

Shocker of this season.#Sanam is far better than #Shivani and #Aajeedh for sure.

Most heart breaking day for me in 4 seasons#Sanam, you are undoubtedly, mentally toughest contestant so far

No bias, no safe game & no partiality in Sanam till end

Can't believe #Sanam got evicted this week. Also can't believe I'm tweeting for her, the only reason is not coz she's the best but she's for sure way better than most of the contestants inside. #Shivani in and #Sanam out makes absolutely no sense! #BiggBossTamil4 #BiggBossTamil

Comment your views on Sanam shetty getting evicted from the Bigg Boss show !!

Previous articleJUST IN : This Contestant Got Evicted From The Show ??
Next article28 Year Old Woman Booked For Abusing Cops !!

Today marks the 118th birthday of "Karmaveerar" Kamarajar who played a major role in developing the infrastructure of Tamil nadu and worked to improve...