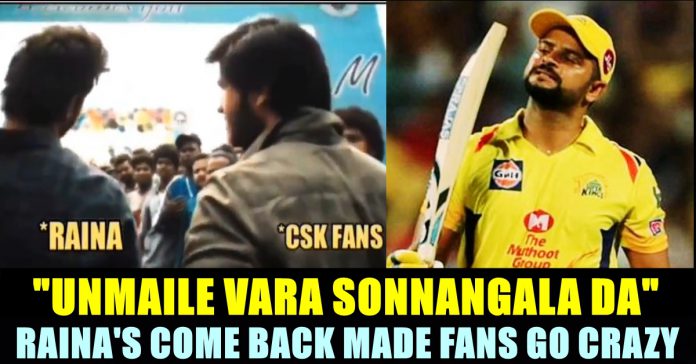 Hashtag “Raina” is trending nationwide after the official announcement on the retention of the left handed batsman by Chennai Super Kings surfaced in the micro blogging social media site. After all the controversies that took place during the 13th edition of IPL tournament, fans of the yellow team had a sigh of relief on knowing that “Chinna Thala” is going to play for the team in the upcoming tournament.

However, the team has decided to release Piyush Chawla and Murali Vijay for IPL 2021. “Yes we will retain Raina and Dhoni will be the captain. Apart from Harbhajan, we might release a few more players” CSK official said to the media. The most recent post from the official twitter handle of CSK suggests, Monu Singh, Kedhav Jadhav also got omitted from the Tamil nadu based IPL team.

Will M.S you, for all the smiles and good times! Keep Whistling for us! #Yellove #WhistlePodu 💛🦁 pic.twitter.com/16NOw1NEh1

Super thanks, for touching our hearts with the leather turns, Piyush Bhai! #Yellove #WhistlePodu 🦁💛 pic.twitter.com/f18tT0mpuF

Meanwhile, the retention of Raina made fans extremely happy as he has been CSK’s most successful batsman with 4,527 runs from 164 matches. Though he announced his retirement from international cricket, the three times champions still considering the star fielder as an irreplaceable assert.

On 29th of August 2020, ahead of the IPL tournament, it was announced that Raina will be leaving UAE due to personal reasons. It was said that he will no longer be available for the whole tournament of IPL. A speculated rift between the team management and Suresh Raina was also did rounds at that time which left the fans in a dejected state. Read : “Raina’s Contribution To CSK Is Phenomenal” Said N Srinivasan !! Fans Not Happy

We won’t change our strategies because of one bad year. Suresh Raina has been one of the most consistent batsmen, we are confident he’ll do well. – CSK’s Kasi Vishwanathan#SureshRaina • @ImRaina • #IPL2021 pic.twitter.com/vvbVEIoSw9

Now, on knowing about the retention of the 34 year old, memes, reactions and tweets celebrating his arrival into the team are emerging in the internet. A fan compared the opening scene of actor Vijay in “Master” film with Raina’s come back and the video is going insanely viral across social media platforms.

MS Dhoni and Raina are back together once again to play in Yellow Jersey. 😍💛#MSDhoni • @MSDhoni • #WhistlePodu pic.twitter.com/gdRSAeeD71

Comment your views on Raina making his come back into the team !!

Previous article“It’s Not Me, Report The Video” Anikha’s Clarification On The Viral Video !!
Next articleParthiv Patel’s Controversial Tweet After Getting Released By RCB !!