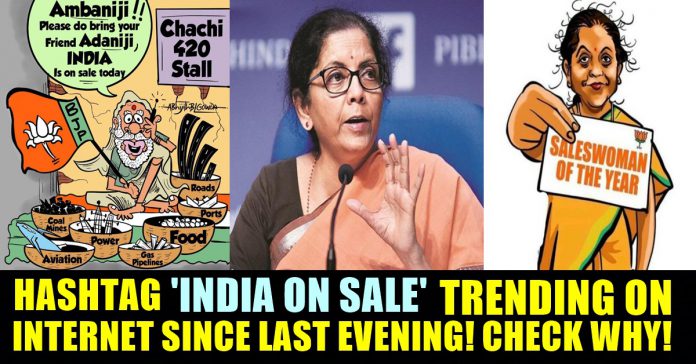 Hashtag ‘India On Sale’ Trending On Internet Since Last Evening!! Check Why!!

Nirmala Sitharaman, Minister of Finance and Corporate Affairs has come out with Rs 6 lakh crore National Monetisation Pipeline that solicits private sector investment in several Government sectors. This news of privatization of Government sectors have has created a commotion among people. Nirmala Sitharaman has said that this opening will help in developing the infrastructure of the nation.

Rahul Gandhi has opposed this proposal of the Government. Nirmala Sitharaman in a session on Tuesday has confounded against Rahul Gandhi’s claim. Blame on Congress was also made. She has asked, “Does he (Rahul Gandhi), understand what monetization is? It was Congress that sold country’s resources made kickbacks in it”.

This proclamation of Rs 6 lakh crore National Monetisation Pipeline proposal has opened up to thousands of people to share their discontent. With this regard, the highly dissatisfied people online have mocked this plan as India is displayed for sales. The hashtag, #IndiaOnSale is trending on Twitter with trolls and comments. Also, Nirmala Sithraman is described as the saleswoman in several tweets. Many memes have sarcastically compared the Government to OLX, Malls, and shops selling India.

Chinmayi Replies To Girl Who Refused Her Help !!