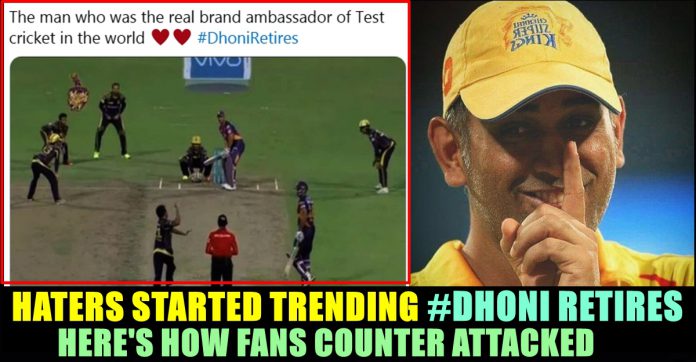 As the Lockdown 4.0 is progressing, people of country India are looking for ways to kill their loneliness. On the night of Wednesday, users of the micro blogging social media platform who wants to end the 16 year cricketing career of Dhoni, started trending hashtag saying #DhoniRetires

In these tough times remember the patience this man had even in 46th over 🙏🏽🙏🏽🙏🏽 #DhoniRetires pic.twitter.com/vtayUxBg51

The man who was the real brand ambassador of Test cricket in the world ♥️♥️ #DhoniRetires pic.twitter.com/bEOaEiobRG

Few reports also suggested that Dhoni is going to open about his retirement announcement soon. He has opened his mind about the retirement to his friends, according to reports. However, on seeing negative trend, fans of the cricketer, started countering back with a hashtag which said #DoniNeverTires

As You will see MS very soon on field…. #DhoniNeverTires pic.twitter.com/kq726YtFMS

He is Well Known for Rising from the Ashes !🤫🔥#DhoniNeverTires pic.twitter.com/PfAFBKx639

Dhoni will retire when these youngsters outrun him in race😂#DhoniNeverTires pic.twitter.com/UtxmnjHGFR

‘MS Dhoni earned enormous number of fans as he loves outsmarting the opposition with his quick thinking, innovative field settings and clever bowling changes. Known for his calm and composed nature, MS Dhoni has gained a nickname “Mr.Cool” for keeping himself calm in the field, unlike other captains.

Comment your views on this hashtags trending and your opinion on Dhoni’s retirenement !!