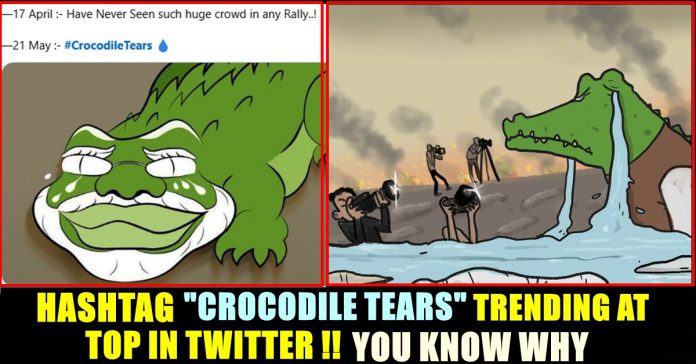 Hashtag “Crocodile Tears” is trending in Twitter after Prime minister Narendra Modi released a video of himself paying tribute to the lives we lost as a country due to the deadly virus named “COVID 19”. In the video that was released on Friday, Narendra Modi could be visibly seen getting emotional. “This virus has … snatched many of loved ones from us. I pay my humble tribute to them and I express my condolences to the families who lost people,” Narendra Modi said with a long pause while choking up.

The Prime minister also thanked all the frontline workers for the service they are providing amidst such pandemic. It all took place during a video conference with health workers in Varanasi. “In the second wave of corona, we are fighting on multiple fronts at the same time. The rate of infection is also much more and patients are in hospital for a longer time.” said Prime minister while paying emotional homage to those who died during the pandemic.

As soon as the video released in the official twitter account of BJP, various kind of reactions started flooding the feeds with hashtag “Crocodile Tears” topping them all. Several memes, posts and reactions were being posted by the users of the micro blogging social media site under the hashtag. Few people pointed out the statement made by Narendra Modi during the election rallies which caused mass crowd gathering.

World Crocodile Association have send 1 truck "Kadi Ninda" on Act of any "Mammal" that try to take their Spot light!

WCA clearly said : They don't have any New Shakha N anyone using their trick is "FRAUD"#CrocodileTears pic.twitter.com/x8eN04yf8A

Crocodile chokes up while talking about Covid death. #CrocodileTears pic.twitter.com/J5QanRv2rD

When distraught families of Corona fatalities were wailing and crying.

He was shouting, "Didi O Didi".#CrocodileTears

Speech after getting the Oscar award
I wanna thank me 🤘#CrocodileTears pic.twitter.com/GX82BQt7IT

The crocodile is crying out of respect for the SUPREME LEADER

I urge every patriot of this great land to cry too at 8PM for 8min and 8 seconds exactly.#CrocodileTears pic.twitter.com/jsKUbHEvsy

Modiji winner of Oscar as a best actor 2021,

He may not be a good Prime Minister of India,

But as an actor he Deserves Oscar award. #CrocodileTears "Didi O Didi" pic.twitter.com/hXlzc7CC0k

He could have cried earlier but waited for the right moment like a true actor 'cos crying and yelling like an amateur is not his tenor, he must perform like a master. Today he proved the uminagined power of melodrama with his peculiar acting. #CrocodileTears pic.twitter.com/L7yqmsbkt7

PM Modi Gets Emotional While Interacting With Varanasi Doctors.
And later we see #CrocodileTears trending at the top.
Mood of the nation !! pic.twitter.com/h7La4tfpXh

Pitta Rajesh, a 39 year old bank employee who was working for State Bank of India died after testing positive for COVID 19. His...

Video of self proclaimed goddess "Annapoorani" appeared in front of media for the first time after her videos went viral in the online platforms....