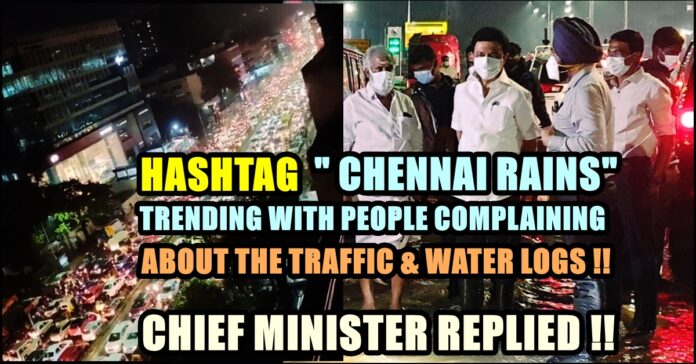 After witnessing a rain that poured heavily from the noon of Thursday, people from across the city started trending hashtag “Chennai Rains” in the micro blogging social media site. The hashtag contained tweets that show how the city got affected due the unexpected heavy rains that showered for more 6 hours. With water logging in many areas, a heavy traffic occurred in many places of the city during the peak hours of Thursday.

In a way of responding to the tweets, Chief minister MK Stalin, announced leave for schools and colleges and also uploaded a series of tweets suggesting people to make their plan accordingly. His tweets also contained the pictures of himself visiting the rain affected areas.

On Thursday, parts of Tamil nadu capital witnessed heavy rains without much expectations. Popular weather blogger Pradeep John said that the rainfall was unprecedented with many areas like Nungambakkam, Mambalam and MRC Nagar receiving over 100 mm in a short span of time. Chief minister MK Stalin came up with a twee updating that the rain occurred beyond predictions and requested people to stay safe and plan accordingly. He also issued leave for school, colleges considering the rain that poured on Friday.

Mylapore is said to have witnessed heavy rains with areas such as T. Nagar, Alwarpet and Royapettah witnessing heavy rains. Pradeep stated that Chennai broke its previous annual record of heavy rainfall which was seen in 2015, when the city faced a massive flooding.

The worst affected areas are the ones near coast. People who use social media shared te visuals of heavy rains that lashed Chennai. An intense traffic took place across the city with water logging in some of the main areas, blocking vehicles. The IMD has issued a heavy rain fall warning for 2 days, December 31 and January 1. On Friday, heavy rains is expected to take place at isolated places such as Cuddalore, Chengalpattu, Viluppuram and Mayiladuthurai districts, said Indian Meteorological Department.

Check out some of the tweets tat surfaced under the hashtag “Chennai rains” :

Heavy spell of rains lashed several parts of Chennai throwing life out gear within hours. The @ChennaiRmc had said that heavy rains with thunderstorms are likely in several coastal districts of #TamilNadu.

20 cms rain in just 7 hours in Chennai today so far. Still raining. This did not happen even in November in such a short time. #chennairains

Rain started at around noon. In 5 hours, pretty much whole city is flooded! Again! 😟 #chennairains

It isn’t visible to us and doesn’t directly affect us. Until rains like these come. Or until we face severe drought. What use is the Rs 500 per vote in such situations? Or the compensation announced afterward? Time to demand the basics from authorities. #chennairains

Don’t know how many ambulances are stuck already 😒 Avoid going out for another 2days until emergency. #chennairains #chennaitraffic https://t.co/j1ukAV8qOC

#ChennaiRains: Khadar Basha, an auto driver says it took him two hours to deliver floor mats at Periamet from Flower Bazaar market and fears it may take another two hours to return due to slow-moving traffic.

Chief minister MK Stalin, at 12 : 40 AM of Friday, came up with a tweet updating about the situation. “Rain is pouring beyond the weather prediction. Due to the heavy rains, water logged in many areas with traffic occurring in many places. After returning from Trichy, I have directed authorities to take actions and the situation will become normal soon. I am requesting people to plan their travels accordingly and follow the guidance” read the tweet of Chief minister MK Stalin.