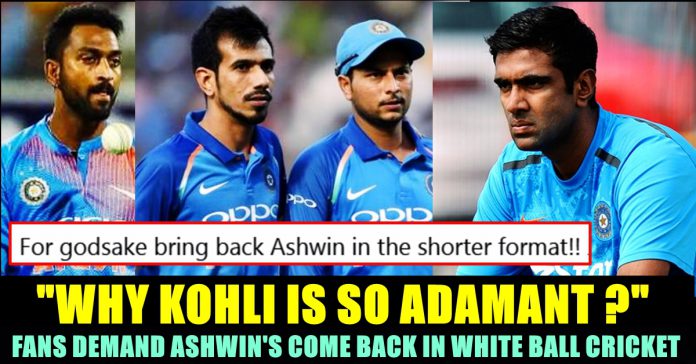 After seeing Kuldeep Yadav and Krunal Pandya conceding 156 runs in the 16 overs they bowled in the second One Day Internationals against England, cricket fans of team India started trending hashtag “Ashwin” in the micro blogging social media site and demanding his come back in the white ball cricket. The Chennai based spinner garnered man of the series award in the Test series and impressed fans with his batting ability as well.

Thank you for your service Kuldeep Yadav good bye!#INDvENG pic.twitter.com/bZDibaJKjU

On seeing the team terribly losing the match even after scoring 337 runs in the first innings, majority number of fans blamed the spinning attack of team India and demanded the come back of Ravi chandran Ashwin in while ball cricket. The cricketer is currently getting ready to take part in the upcoming IPL season.

“Ravichandran Ashwin deserves a shot at white ball redemption. Atleast in T20i’s.” read a fan’s tweet whereas another one said “A finger-spinner who can actually turn the ball… Bring him back ASAP”

When Dhoni was captain Kulcha , Ashwin & Jadeja were deadliest duos in every format

U need amaster mind to guide them all behind the stump💯#INDvsENG #Ashwin Bring Ashwin back in ODI #Master pic.twitter.com/xYlgeUSdHQ

Could well be Kuldeep’s last white-ball game for India. He’s lost the stomach it seems #INDvEng

Ashwin should be in the playing eleven.
He can perform well.

When Chahal plays Kuldeep looks better, when Kuldeep plays Chahal looks better, in reality both are finished, need to move on from them like we moved on from Ashwin Jadeja in 2017

Kuldeep is not doing good since longtime. Dont know why Kohli is so adamant for @ashwinravi99 . Ashwin deserves a call in white ball cricket. Ashwin-Jadeja pair makes our team complete in white ball.

Bring back @ashwinravi99 and @imjadeja Kohli is giving chance to Kuldeep despite of his consistent poor performances. Why cant he call Ashwin in white ball.

For godsake bring back Ashwin in the shorter format!! Jadeja and Ashwin are lethal soon duo together..

Time to bring R Ashwin back..
Kholi needs to try him out atleast for couple of series and then decide..
Kuldeep lost his touch long back..
Once kholi hailed this kulcha as his big weapons.. things have changed drastically ☹️#INDvENG pic.twitter.com/K7Kf2nO0e8

England won the toss and asked Team India to bat first. Despite of having a poor start, the team managed to score 337 runs. Tackling the poor bowling attack of team India, England chased down the total in the 44th over of their innings. Johnny Bairstow who scored a mammoth century named as the man of the match.

“Maybe the wicket settled a bit better but that’s no excuse. We just defended a score two days ago. Tonight was a case of lack of execution at certain stages but they didn’t give us anything. It’s rare to play at such a high strike-rate and not give any chances.” said Indian skipper Kohli. “I never played for hundreds in my life, probably why I ended up getting so many in such a short while. It’s more important for the team to win. If I get a three-figure score and the team doesn’t win, it means nothing.” he added.

Previous article“Don’t Tell Me What Size I Should Be” – Bigg Boss Abhirami
Next articleNetizens Trolled Bumrah After Seeing His Wife At Work !!

Tamil nadu Finance minister Palanivel Thiagarajan who is pretty much active in the micro blogging social media site, reacted to the fake allegations that...

This Contestant Left The Bigg Biss House With Suitcase ??

The grand finale of Bigg Boss show is nearing and six finalists are contending for the title so far. Aari Arjunan, Balaji Murugadoss, Rio...