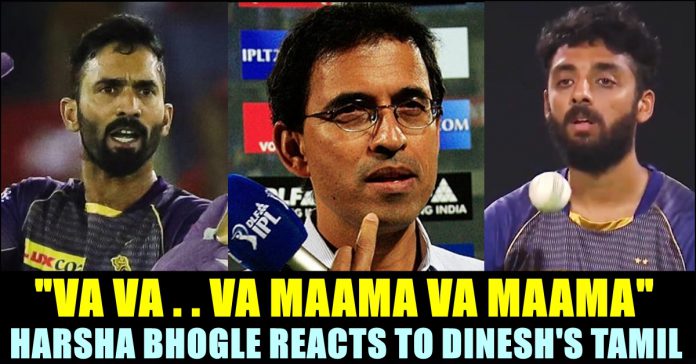 Despite of his on and off batting performance for Kolkata Knight riders, Dinesh Karthick is winning the hearts of Tamil speaking IPL followers through his candid instructions to Varun Chakravarty from behind the stumps. While Tamil people are sharing the videos proudly, a video of Hyderabad based English commentator Harsha Bhogle reacting to a command of Dinesh Karthik is doing rounds in the social media platforms.

During the match between Kolkata Knight riders and Mumbai Indians, Dinesh Karthik constantly gave instructions to Varun Chakravarty during his over. On hearing it, Harsha enlightens the non-Tamil speaking Television audience by disclosing that Dinesh is talking to Varun in Tamil language.

“He is telling him where he want him to bowl. “Ulla Vei Ulla vei” he’s telling him bowl in line, bowl in” says Harsha Bhogle followed by which Dinesh keeps giving Varun his commands. “Ethaavthu Pannuvan nu thonuthu ivan, Ethhavthu panuvan. Va Va Va Udatha” says Karthick which is roughly translated as “It seems he is up to something. Don’t let him. Come on”.“Va Va . . Va mama Va mama” Dinesh shouts to encourage Varun.

Dinesh Karthik instructing his teammate Varun Chakravarty in Tamil language to keep it within themselves without letting the batsmen know about their game plans and strategies. Instead of discussing with him ball to ball by walking through the pitch, Dinesh chose this way. The stump mic which was kept to record the rattle of stumps for the Television audience, recorded Dinesh Karthik’s chatter too.

From instructing Varun on where to bowl the ball to criticizing him for bowling a bad delivery, everything was recorded only to make the Tamil audience go gaga over it. On seeing fans capturing the moments and uploading it in social media platforms, Star Sports network came forward and made a compilation for their followers.

“Ithu Thaan Ithu Thaan vechiko, Usharu Usharu, Konjam ulla varlam paravala” says Dinesh to Varun in a certain occasion which means “This is it, This is it, keep it there, Be careful, it is ok bowl a little bit inside now”. “Nalla irunthuthu, ithu than ithu thaan ithu thaan length-uh nyabagam vechiko” Karthick says which means “It was good, This is the length, keep it in mind”. He said it when Varun bowled it between slot and yorker length with a little bit of turn towards the stumps. When Hardik Pandya was batting Karthik can be heard saying “Unna adikamatan Unna adika maatan, ne podu” (He won’t hit you, you bowl).

“Enga podra ulla vei” suggests Dinesh to make Varun bowl onto the stumps which gains their team a wicket in the very next ball. During the batting of RCB, when Aaron Finch and Kohli were discussing something between the over, Karthik says “Podu Thairyama podu, unna adikka venam nu sollirkaan, ne podu” which is roughly translated as “He asked him not to hit you, you bowl bravely”. “Avan apdi yosikran ne ipdi yosikra, podu” (He is thinking that way, you are thinking this way, just get him out) he adds.

Here’s the videos missed out by Star sports Tamil :

Comment your views on this reaction of Harsha Bhogle !!

Previous article“50 Crore” Pakistan’s Very Own “Money Heist” Triggered Netizens To Have A Meme Fest !!
Next articleVanitha Replied To The Haters Who Trolled Her For Reviewing BIGG BOSS 4 !!

"Bigg Boss" fame Shivani Narayanan, years ago, released a statement slamming those who are uploading abusive comments for her Instagram posts. Not only the...