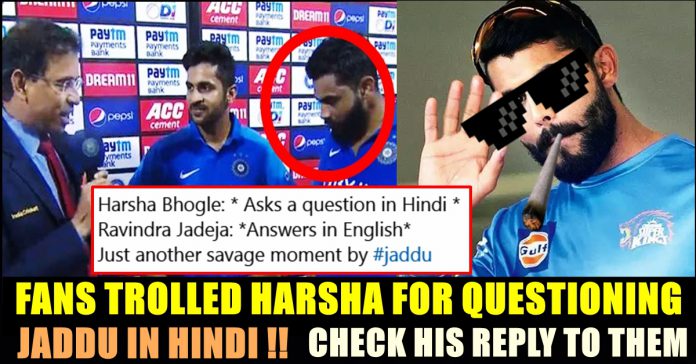 India’s convincing run chase with Shardul Thakur’s cameo helped them to win the One day International series against Pollard led West Indies team. When the team needed less than 30 runs, Virat Kohli, a well settled batsman got out unexpectedly. He scored 85 runs when he edged the ball onto the stumps to get out.

Meanwhile, Jadeja’s calculative innings also played a major role in India chasing down the huge target of 315 runs. He scored an unbeaten 39 runs from 31 balls. India relied on a key 58-run sixth-wicket stand between Kohli and Ravindra Jadeja. West Indian pace bowler Keemo Paul claimed three wickets, including that of Kohli in the 47th over, before Jadeja and Shardul Thakur, 17 not out, took the team home and to a 2-1 series win.

Meanwhile, Harsha Bhogle, one of the commentator and presenter of the match, interviewed Shardul Thakur and Ravindra Jadeja during the post match. While interacting with Jadeja, Harsha Bhogle questioned him in Hindi to which the all rounder answered in English. This moment interested the netizens who started praising the cricketer for his surprise to Harsha.

Oh man.. @bhogleharsha asking question in Hindi and @imjadeja replying in English. How cool is that Sir Jadeja 👍👍👍👍 #INDvWI

Jadeja replying in English to @bhogleharsha 's question framed in Hindi was the awkward moment of the day.

What is the most 'Bitch Please" moment of the match….???@bhogleharsha asks question to @imjadeja in Hindi and Sir Jadeja listens carefully and responds in Queen's English.

Harsha asks Jadeja a question in Hindi and Jadeja replies in English. What Kapil Dev does most of the times. #INDvsWI

Harsha Bhogle questions Jadeja in Hindi and he replies in English.

Harsha Bhogle seems to be not in sync with the changing dynamics of the team.#INDvWIN#jadeja

These comments from the fans grabbed the attention of the commentator himself who came up with a clarification. In his tweet the commentator said that he knows Jadeja for 10 long years and went with Hindi as he thought Jadeja is comfortable in Hindi. He further added that he shifted to English once the indication came from the allrounder.

Okay, since I have been flooded with responses on this…. In a post match presentation, you always go in the language the player is most comfortable in. I've known Jadeja for 10 yrs now and so began in his language. The moment he indicated he was good to go in English, I shifted

Harsha Bhogle recently grabbed the headlines because of his argument with Sanjay Manjrekar during the pink ball test game. Being one of the most loved commentator, Harsha is also considered as one of the best person to interview players during post match presentation.

What do you think on this clarification from the commentator ?? Comment your views below !!

Actor Vijay has a strongest fan base comparing to other actors in Kollywood. “Bigil”, actor Vijay’s 63rd film after A.R Murugadoss’s “Sarkar”, is the...