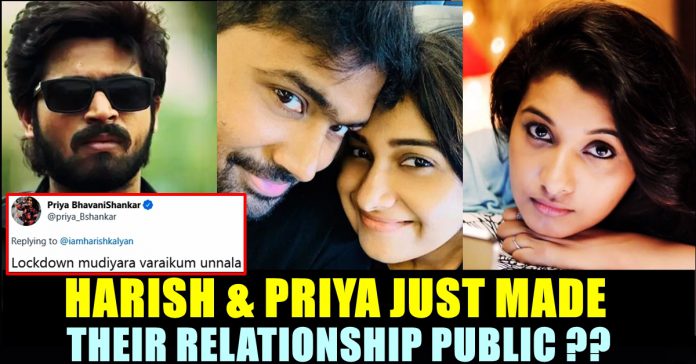 Young sensation and Bigg Boss fame Harish Kalyan uploaded a post in his official social media accounts with actress Priya Bhavani Shankar and left his followers in a confused state. The post’s caption he wrote hinted that the duo are involved in a romantic relationship and the actress replied to his posts in a way of acknowledging them. While most of their followers confirmed that it is for their upcoming movie’s promotion, few ot confused and asked what happened to the fiance of Priya.

“Meyadha Maan” fame Priya Bhavani Shankar’s was first recognised a s a Television News presenter in Puthiya Thalaimurai News Channel. She became very popular once started acting in Star Vijay’s Kalyanam Mudhal Kadhal Varai. She began her career as a software engineer at Infosys, after her Bachelor’s Degree in Electronics and Instrumentation Engineering from B.S. Abdur Rahman Crescent Institute of Science and Technology. After entering the media industry she did her Master of Business Administration.

The actress who gained many fan pages in social media platform in a very short span, has a separate set of fan following for her appearance and screen presence. After “Meyatha Maan” became a hit, Priya went on to act in films like “Monster”, “Mafia” etc. Earlier, a report surfaced saying that Harish Kalyan and Priya Bhavani Shankar are teaming up together for the official remake for Telugu blockbuster “Pelli Chupulu”. The film marked the debut for Vijay Devarakonda as protagonist.

Now, Harish Kalyan posted tweet writing, “Finally, Happy for US” with two heart emojis. In the post, the duo could be seen using a phone. Check out his post here :

Replying to this tweet, Priya asked why Harish couldn’t wait till the end of lockdown. “I wanted to make it public first.. I earned it” she wrote in her reply tweet.

Check out some of the reactions his post received below :

It is notable that Priya already has a boyfriend named as Rajavel and the couple are expected to get married to each other soon.

A post shared by Priya BhavaniShankar (@priyabhavanishankar) on Jan 26, 2020 at 8:58pm PST

Comment your views on Harish and Priya pairing for the remake of “Pellichupulu” !!