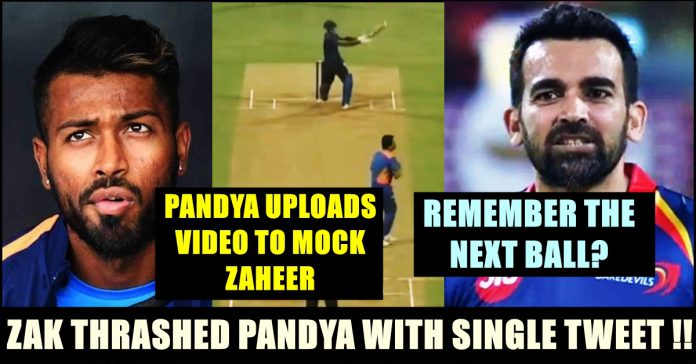 Zaheer Khan, one of the most experienced bowler of Indian cricket team, celebrated his 41st birthday yesterday. Wishes from all over the internet poured for the highest number of wicket taker in the India’s world cup winning tournament.

The most attention grabbing tweet came from his junior and current Indian team’s all rounder Hardik Pandya. The cricketer posted a video of him smashing Zaheer for a maximum in one of a local match and wrote “Happy birthday Zak … Hope you smash it out of the park like I did here 🤪😂❤️❤️” in his official twitter account.

Happy birthday Zak … Hope you smash it out of the park like I did here 🤪😂❤️❤️ @ImZaheer pic.twitter.com/XghW5UHlBy

Hardik Pandya who already got in controversy and banned from Indian team for his comment in Koffee with Karan talk show, was criticized by his own followers for his disrespectful comment on a senior player like Zaheer Khan who achieved many things for the country.

Greatness Humbleness and respect towards each other Separates
the Legend and Normal fellahttps://t.co/cYMfmVGu6Q

If you were playing against him at his prime, your certainly had atleast 5 injuries and permanent loss of Brain.
See the swings, you'll never manage to come near his simplest swing bachcha.
चड्डीत राहायचं. pic.twitter.com/ddO4jvvGzy

You are taking a legend for a ride..
he was the one who became expert in knuckle ball..
I think its time to ask Karan johar to host a show with you..😛

Now to our surprise, Zaheer himself responded to Hardik Pandya in a most epic way. The seam bowler gave it back to Hardik Pandya and made him taste his own medicine by replying “Hahahaha….thank you for the wishes @hardikpandya7 my batting skills can never be as good as yours but the birthday was as good as the next delivery you faced from me in this match😉”

Hahahaha….thank you for the wishes @hardikpandya7 my batting skills can never be as good as yours but the birthday was as good as the next delivery you faced from me in this match 😉 https://t.co/anhQdrUBN7

This comment from the ace cricketer is winning hearts all over the Internet. In a career spanning 14 years, Zaheer Khan bagged 311 wickets in 92 Tests and uprooted 282 wickets in the 200 ODIs he played for India in the blue jersey. He also represented Mumbai Indians and Delhi Daredevils in IPL tournament.

What do you think on the reply of Zak ?? Comment your views !!

Chennai No More A Safe Place For Women? 24 Yr Old Hacked To Death In Nungambakkam

A female Infosys employee was brutally hacked to death at the Nungambakkam railway station in Chennai on Friday morning at around 6 am when she was waiting to...