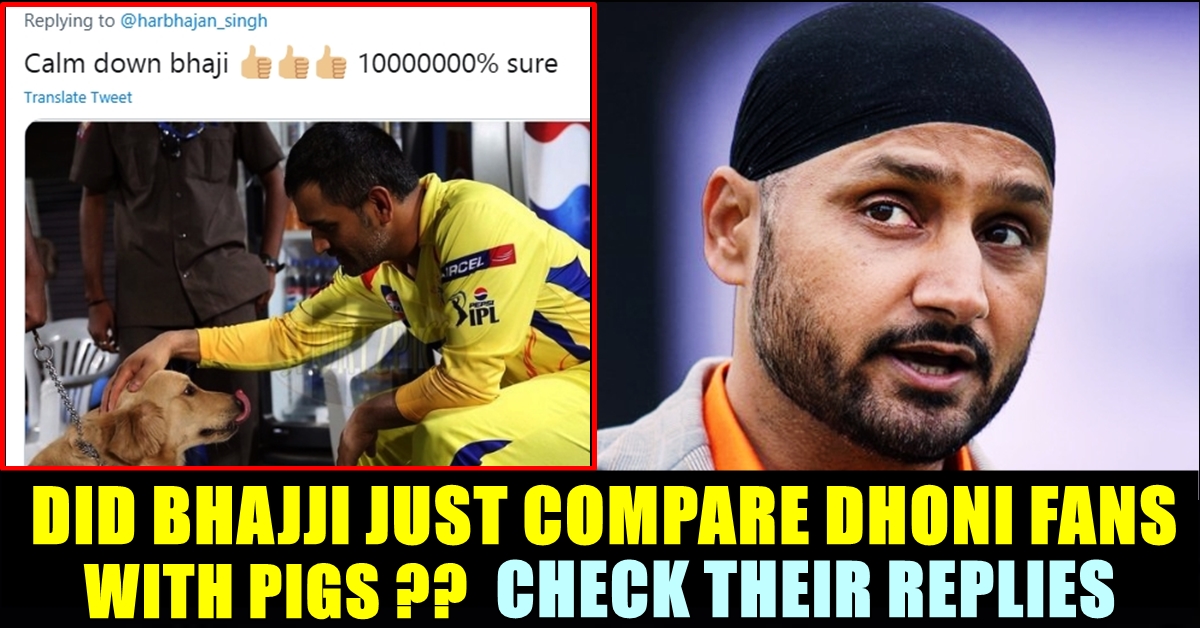 Followed by the replies received by Harbhajan Singh for posting a tweet against MS Dhoni, the former Indian off spinner came up with a tweet taking an indirect dig at the fans of the cricketer. Through his tweet, Harbhajan seemingly compared them with pigs and said he won’t wrestle with them. However, he got severely trolled again by the fans of the CSK captain.

“I learned a long ago never to Wrestle with a pig….You get dirty, and beside, the pig likes it” Harbhajan wrote in his tweet.

I learned a long ago never to Wrestle with a pig….You get dirty, and beside, the pig likes it

Here’s how Dhoni fans reacted to this tweet of him :

Thats the reason why player like sreesanth never slapped you back

Experts would have told me to go with the lead spinners but I had other ideas..! pic.twitter.com/uGEBzjdEr5

Not a meme, just a lovely pic of MSD😊😊 pic.twitter.com/fNnduRa9Qf

Did you learn it from Sreesanth who didn't slap you back?

It all started when Harbhajan posted a laughing emoji to a troll video of Mahendra singh Dhoni uploaded by a twitter user. Puzzled with this online activity of him, fans of CSK and Dhoni reacted in various ways to the tweet. Majority of them expressed their disappointment towards Singh as he was playing for CSK under Dhoni for past few years.

Harbhajan who was supposed to represent the team, left to India citing personal reasons. However, he has been expressing his opinions regarding the match results of this ongoing IPL tournament. Earlier, the veteran cricketer faced the wrath of CSK fans for directly supporting a twitter user who trolled Dhoni, referring to a controversial incident that took place in the match between Chennai Super Kings and Sunrisers Hyderabad.

Abdul Samad, emerging player of Sunrisers Hyderabad team posted a photo in his twitter account where we can see Dhoni giving some inputs to him and other young players post the match. “Important lessons.#MSDhoni” his caption read.

To this post of the cricketer, a Twitter user, in a way of mocking Dhoni, posted a video of the CSK captain confronting with the umpire and wrote “Yes”

This video received well by the haters of the former Indian captain. So far it gained nearly 8k likes and a thousand retweets. To our shock, Harbhajan singh, the former CSK player, shared the tweet and laughed at it by adding laughing emojis.

Fans who got taken aback, waited for the cricketer to delete the tweet and say that his account was hacked. Unfortunately, the tweet still stays there receiving 20k plus likes. Dejected Dhoni fans started slamming the cricketer for his online activity. A set of fans asked him to learn from Imran Tahir who recently posted a tweet saying that carrying drinks is not an issue. “If I get a chance I will do my best but for me team is important” he said in his tweet. Read : Harbhajan Directly Attacked Dhoni Only To Get Trolled By His Fans !!

Internet Explodes On Seeing This Reaction Of Jofra Archer On Kohli’s Moves !!
“She Just Removed Her T-shirt In front Of 150 Cameras” – Vanitha Recalls