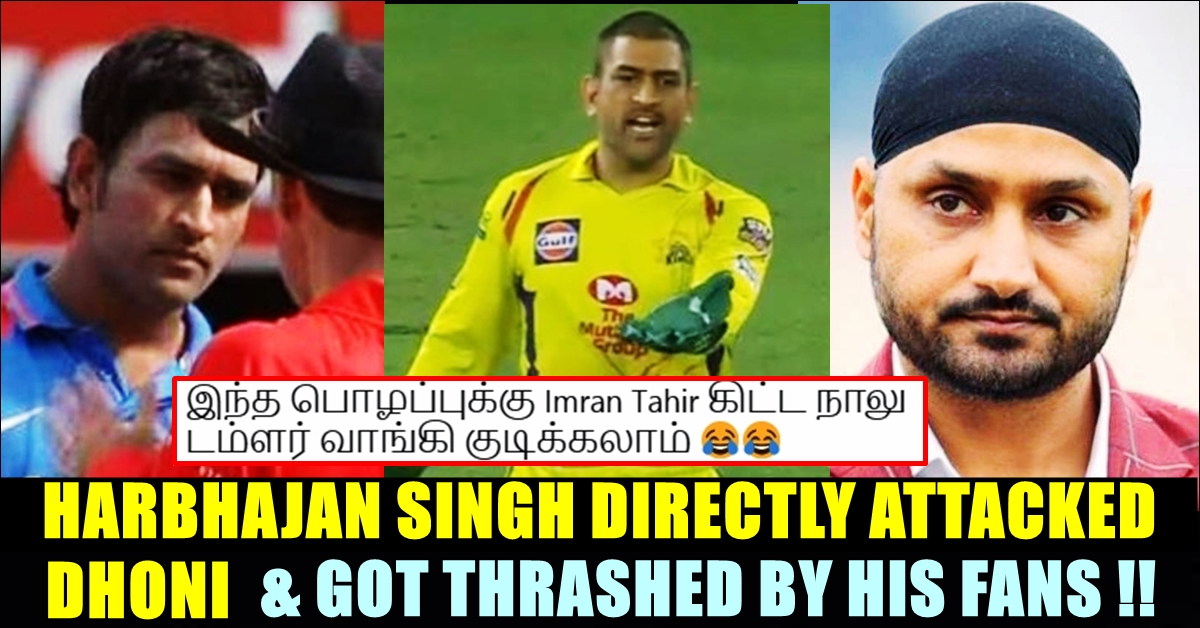 Harbhajan singh who recently took a sly dig at Dhoni when he failed to perform in a match for Chennai Super Kings, now came up with a tweet directly attacking Dhoni which left the fans of Chennai Super Kings in a shocked state. Harbhajan who was supposed to represent the team, left to India citing personal reasons. However, he has been expressing his opinions regarding the match results of this ongoing IPL tournament.

Be it win or defeat, after every Chennai Super Kings match, a Tamil tweet filled with mass dialogues from tamil films would surface in the official twitter account of Harbhajan Singh. Tamil poetries such as Thirukural also took place in Harbhajan’s tweets which was loved by the people of Tamilnadu who started to call him as “Thirubajan Singh”. This fame led him to sign a number of Tamil films. “Friendship”, “Dikkilona” are some of the Tamil films Harbhajan acted so far.

Now, the lovely cricketer is facing the wrath of CSK fans for directly supporting a twitter user who trolled Dhoni, referring to a controversial incident that took place in the match between Chennai Super Kings and Sunrisers Hyderabad.

Chennai Super Kings registered their third victory of the tournament in their eighth match against Sunrisers Hyderabad and moved on to the sixth spot in the points table. SRH batsmen fell 20 runs short which earned the yellow team their much needed 2 points. What grabbed the attention of the fans the most is, Dhoni’s animated reaction in the 19th over when umpire tried to signal wide for a delivery bowled by Thakur.

When Shardul Thakur bowled a wide yorker to Rashid Khan, it went past the Afghanistan all rounder and the umpire looked like he was going to give it as wide. Just when the umpire was about to lift his hands to signal wide, Dhoni, from behind the stumps, expressed an animated gesture pointing out that the ball went above the bat. The umpire immediately stopped and restrained himself from giving it a wide. David Warner who was sitting in the dugout got upset with the final decision of the umpire.

Now, after the match, Abdul Samad, an emerging cricketer of Sunrisers team posted a picture of Dhoni giving some inputs to him and other young players regarding the game of cricket and wrote “Important lessons” as his caption.

To this post of the cricketer, a Twitter user, in a way of mocking Dhoni, posted a video of the CSK captain confronting with the umpire and wrote “Yes”

This video received well by the haters of the former Indian captain. So far it gained 7k likes and a thousand retweets. To our shock, Harbhajan singh, the former CSK player, shared the tweet and laughed at it by adding laughing emojis.

Fans who got taken aback, waited for the cricketer to delete the tweet and say that his account was hacked. Unfortunately, the tweet still stays there receiving 20k plus likes. Dejected Dhoni fans started slamming the cricketer for his online activity. A set of fans asked him to learn from Imran Tahir who recently posted a tweet saying that carrying drinks is not an issue. “If I get a chance I will do my best but for me team is important” he said in his tweet.

Experts would have told me to go with the lead spinners but I had other ideas..!!! 😂😂😂 pic.twitter.com/zhMSJ9q4EH

You've played for CSK for 2 years and almost 3rd too, sure that's not the approach you should have.

I don't know why you guys hate him too much but I know everyone has two faces.🖤 pic.twitter.com/1EJAhLVGri

In game it happens Paaji, As a senior player you know that,
We remember this also 👇 pic.twitter.com/Nw46Rx29xo

But they don't dare say the same here coz here he is in blues .. it's all about coz of the hatred on the yellow outfit n nothing more . pic.twitter.com/aarCpIdEDo

This Young, Emerging Actor Refused To Act In “800”!!
Vijay Fans Can’t Keep Calm After Seeing This Tattoo Of A KKR Player !!