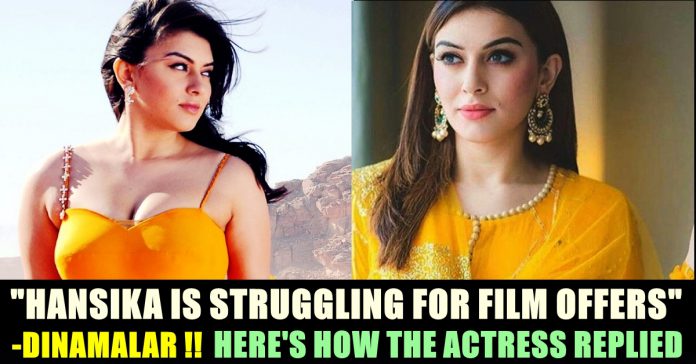 Hansika Started Concentrating In Business Due To Lack Of Film Offers ?? Check Her Reply

After Hansika Motwani launched her “The Balloon Stylists”, a new venture which focuses on parties and other celebrations, a news in Dinamalar website surfaced saying that the actress getting herself involved in the business due to lack of film opportunities. The popular Tamil news portal said that Hansika has been acting in only one film named as “Maha” for past two years. However, the “Singam” actress rubbished the rumour through her official twitter account with a sarcastic reply.

Hansika who enjoys more than 80 lakh followers across all the social media platforms, was very much busy in shooting for her 50th film “Maha” before lockdown. She who debuted to Tamil film industry through Dhanush’s “Mappillai”, appeared in several commercially successful Tamil films including Engeyum Kadhal, Velayudham, Oru Kal Oru Kannadi, Theeya Velai Seiyyanum Kumaru, Maan Karate, Aranmanai, Manithan, Bogan etc. The 28 year old actress enjoys a huge fan following across the country as she worked in almost all the prominent film industries in India.

The report surfaced in Dinamalar site said that Hansika lowered herself and with young actors such as Vikram Prabhu and Atharva without much film opportunities. “She already started a youtube channel amidst COVID 19 pandemic. As she is getting very few film opportunities, she got involved in business it seems” the news read.

Replying to the news, Hansika, through her official twitter account said that the news cracked her up. She who thanked Dinamalar for advertising her new venture, wondered since when Dinamalar started managing her works. “Thanks But No Thanks”, “Not This Time” her hashtags read.

“Haha this news cracked me up. thank you @dinamalarweb for my new business op and for keeping me in your thoughts as always. wondering since when did you started managing my work #ThanksButNoThanks #NotThisTime“ the actress’s tweet read.

Earlier, actor Vivekh appreciated Hansika for taking care of underprivileged children and for helping women with breast cancer. He said Hansika is a beautiful actress with a golden actress to which Hansika thanked him.

Comment your views on this reply from the actress !!

Previous article“Meera Mitun Has Became A Brand Now” – Madan Gowri !!
Next articleVignesh Shivan Opens On His Marriage With Nayanthara For The First Time !! WATCH