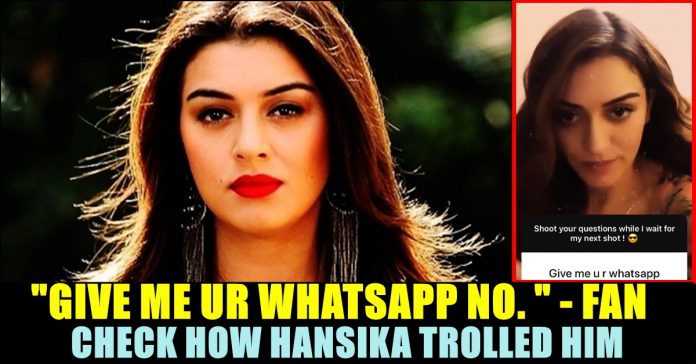 Hansika Replied To Fan Who Asked For Her Whatsapp Number !! WATCH

Hansika Motwani who is very much busy in shooting for her 50th film Maha, conducted a chat session with her Instagram followers in between her shots. In this digital era, celebrities choosing social media to interact with their fans and followers instead of conducting a fans meet became common. They find it easy to keep their fans engaged in this way rather than meeting them in person and to spend time with them with photograph sessions. In this way of interaction, there are options for them to avoid the absurd questions asked by few fans who intend to troll or criticize.

Hansika who enjoys more than 33 lakh followers for her Instagram account answered to her followers by posting videos in the story column of her Instagram. Many fans questioned the actress about her make-up secrets, next projects and few wished her the best instead of shooting questions. Meanwhile, few of her followers tried to go beyond limit and asked her to reveal her Whatsapp number to which the “Romeo Juliet” actress answered in a smartest way.

To one of a follower who asked Hansika about her marriage, she replied by saying “Not any time soon. No plans for marriage”

Hansika about her marriage . . 🥳🥳🥳 pic.twitter.com/PFS1w9MChT

Another user went one step ahead and proposed Hansika to marry him to which Hanska pretended like that the shot was ready and skipped the question. “Ohh shot ready.. I am gonna answer that later” she said.

To another user who asked for her phone number, Hansika replied by telling a fake combination numbers and said “Oh.. I forgot my number”

What do you think on these replies provided by the actress ?? Comment your views !!