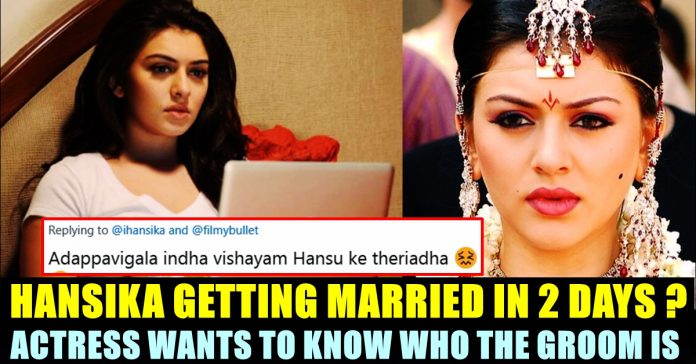 A twitter page named as “Filmy Bullet” with 185 followers said that actress Hansika Motwani is going to get married in a couple of days. Surprisingly, the actress herself replied to the tweet and cleared the air on the mere rumour. Her sarcastic reply with several laughing emojis triggered twitter users to troll the page for spreading false news.

Hansika who enjoys more than 80 lakh followers across all the social media platforms, was very much busy in shooting for her 50th film “Maha” before lockdown. Hansika debuted to Tamil film industry through Dhanush’s “Mappillai”. After that she appeared in several commercially successful Tamil films including Engeyum Kadhal, Velayudham, Oru Kal Oru Kannadi, Theeya Velai Seiyyanum Kumaru, Maan Karate, Aranmanai, Manithan, Bogan etc. The 28 year old actress enjoys a huge fan following across the country as she worked in almost all the prominent film industries in India.

Breakingnews: heroine #hansika going to marry a businessman in a couple of days @ihansika pic.twitter.com/YK5yk7jPHq

As she got tagged in the post, Hansika who saw the post immediately denied the news by asking who the groom is. “RUBBISH ! Omg who is he ????” wrote Hansika by adding 11 laughing emoji.

To one of her friend from the industry who asked why she hasn’t informed him about it, the actress said that she herself got to know about it just now. “Oh my god!!!!! Why haven’t you told me yet ???” asked the friend to which Hansika replied by saying “Because I also just got to know”

This reply from the actress made her fans to laud her for the instant reply to bash the miscreants. Check out some of their replies :

Comment your views on these alleged media portals which are spreading such fake news about known personalities !!

Dhiwaharan Palani - January 21, 2021
0
Abhirami Venkatachalam, former Bigg Boss contestant and model came up with a couple of Instagram stories lashing out at people who "slut...