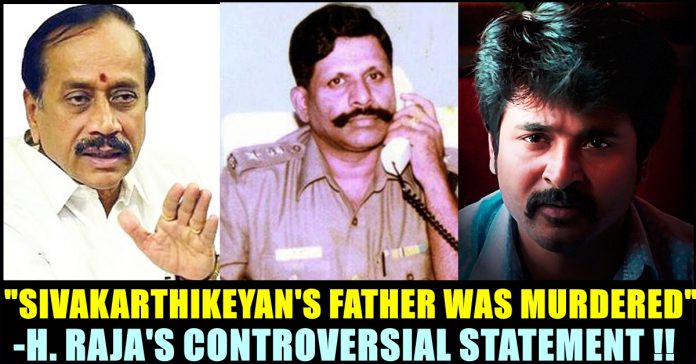 Controversial BJP politician H.Raja’s statement about the demise of late jailor Jayaprakash, father of actor Sivakarthikeyan’s has shocked the fans. The politician alleged that Jayaparakash was killed by a politician who is still in power and said that he feels bad to talk about it in an interaction with the press reporters. The statement has shocked the public who are aware of the emotional bond Sivakarthikeyan has with his father. H. Raja uttered the statement while condemning Dr. P Thiaga Rajan (PTR), Minister for Finance & Human Resources Management, Tamil Nadu for his recent statements about Sadhguru.

H. Raja is known among Tamilnadu based social media users for his controversial statements against actors. His remarks on the film Mersal’s GST and Digital India monologues, created huge controversy during the film’s release time. Few believed that the film’s mileage increased only after the controversy created by Raja. That did not stop him from stoking further controversy by saying Mersal film hero Vijay is a Christian and hence the reason for the criticism of GST in his film.

He also posted a controversial tweet during the release time of “Sarkar” to troll the film and it is believed that his statements gained the film more publicity. Now, H. Raja has made a controversial statement about the demise of Sivakarthikeyan’s father. “PTR Thiaga Rajan has threatened Sadhguru. What business he have got ?? We are going to find who the person PTR Thiagarajan is. We are going to talk about his family. Who are you to threaten Sadhguru ?” Raja said in the interaction.

“Not only that, I really feel bad to talk about it. The current MLA of Papanasam constituency is an accomplice of the one who killed jailor Jayaprakash. Popular Tamil actor Sivakarthikeyan is the son of Jayaparakash. Don’t you have any shame ? You think that anyone can demean the Hindi religion?” Raja said in his statemt, video of which is doing rounds in social media platforms.

However, it has been widely believed that H. Raja has mistakenly dragged the name of Sivakarthikeyan’s father as reports suggests that the cause of Mr. G. Doss’s demise is natural. Fans have been expressing their emotions in social media platforms as Siva is very well known for having a special emotional bond with his father.

When the actor garnered his first ever award as a “Best entertainer” in Vijay Awards, he said that he badly misses his father at that special moment with tears rolling down from his eyes. The actor’s emotional break down gained him immense support from the fans of Tamil cinema. Recently, a video of himself sharing about the hardship he went through due to his father’s demise made people go emotional. Read : When Sivakarthikeyan Improvised A Dialogue About Losing Father In His Film !! WATCH

Previous articleTamil Actor Took An Indirect Dig At PM By Comparing Him With This Famous Character In “Titanic” !!
Next articleRaiza Opened About How She Regained Her Old, Glowing Skin !!

Actors Who Were Affected By The Floods Are Posting Emotional Videos !! Ananya’s House Completely Drowned !!

The weekend comes with a tiny bit of solace for Kerala, that has been reeling following the floods, as the state makes baby steps...

Prithi Ashwin came up with a video of one of her children looking through a binocular towards the field from the stadium of Oval...