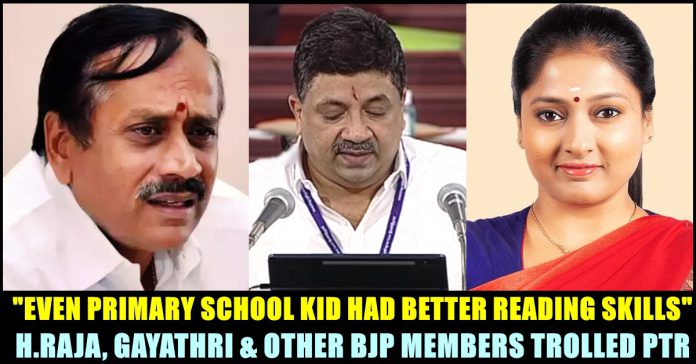 On Friday, the DMK government presented its first budget at Kalaivanar Arangam, three months after coming to the power. It is the first paperless budget session conducted in the Tamil nadu Legislative Assembly which is made on the revised budget for the financial year 2021-22. While presenting the budget, the finance minister said that the state’s revenue for the fiscal year is estimated at Rs 2,60,409.26 crore, whereas expenditure is estimated at Rs 2,61,188.57 crore. The revenue deficit is estimated to be Rs 58,692.68 crore.

One of the most talked about announcement that was made during the budget speech, is the petrol price reduction. Tamil nadu finance minister PTR announced that the petrol price has been cut by Rs. 3. “2.6 core people in Tamil Nadu use two-wheelers. We have reduced ₹ 3 in petrol price, and due to this we will face a ₹ 1,160 crore deficit,” Mr P.T Thiagarajan said, according to the reports.

Many other announcements such as Rs. 703 crore being granted for the subsidy for free bus travel for women, Rs. 150 crore being allocated for the trans gender’s pension scheme etc. It was reported that Rs. 4142.33 crores allocated to the Adi Dravidar and tribal welfare department. To continue excavation at its Archaeological sites including Keeladi, Rs. 5 crore was allotted. Many other budget allocations including Rs. 1725 crore being allotted for the mid-day meals scheme, were announced in the meeting.

On seeing the budget speech of TN Finance minister PTR, among all the schemes he announced, prominent members of BJP made fun of the former’s Tamil. “Last ranking student in my primary school had better reading skills than the Finance Minister of Tamil Nadu who’s reading out #TNBudget2021 in the Assembly. PTR is reading from Tamil Script/English script like Sonia Gandhi reading Hindi from the Italian script? Any cameras?” SG Suryah spokesperson of BJP party said in his tweet.

Last ranking student in my primary school had better reading skills than the Finance Minister of Tamil Nadu who's reading out #TNBudget2021 in the Assembly. PTR is reading from Tamil Script/English script like Sonia Gandhi reading Hindi from the Italian script? Any cameras?

Karate Sangeetha of BJP shared a video of actor Vivekh’s comedy scene to troll the budget speech of PTR and Gayathri Raguramm of the same party retweeted it.

Check out some of the reactions from DMK supporters for their tweets :

It's not a reading competition bro.. Stephen Hawking couldn't even speak but he did wonders in physics world.. This is basic sangi கூமுட்டை தனம் to link language proficiency to intelligence.. It shows you don't have anything to say about the flawless contentful #TNBudget

Reading skills don't interpret knowledge, take example of BJP mostly everyone can read good but how about their knowledge and understanding of living.
Nirmala Sitharaman said she can't manage PSU and that's y she is selling and she also said onions are not necessary for cooking😂

Do you want samples….

Language or knowledge?? Which you want…I want knowledge….

Previous articleYashika Gets Emotional About Her Friend Valli Chetty Pavani !!
Next articleOlympics Got Thrashed By Fans For Completely Ignoring India !!