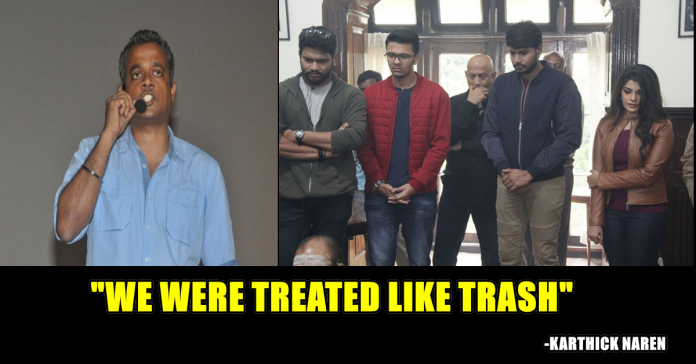 The movie production house collaborated with RS Infotainment and produced films like “Nethane En Ponvasantham “and also individually produced films like Gautham Menon’s experimental venture “Nadunisi Naaigal” and Director Ram’s “Thanga Meengal”. After that no film released under “Photon Kathas” production as there were a rumoured clash between Photon Kathas and RS Infotainment to which Gautham responded as “was a vision, but we faltered because of the films that we did”, and made reference to the cases filed by RS Infotainment against the studio.

In late 2017 Gautham Menon started releasing youtube contents under his own banner which is named as “Ondraga Entertainments”. The contents were in the formats of youtube series, short films and album songs.

Meanwhile, Karthick Naren, a 22 year old sensational who gave a blockbuster called “Dhuruvangal Pathinaaru” in the year 2017 announced that his next flick “Naragasooran” which stares Aravinth Swamy and Shreya is going to be produced by Gautham Menon. It is evident that the film’s shooting also finished and wrapped in 41 days. As things are in this way there was a twitter clash between both the directors which left every Tamil film fans in absolute trauma.

Sometimes a misplaced trust may kill you. People should think twice before taking it for a ride. The last thing you want to see is your passion getting butchered from all the directions for a mistake you did not commit. Threshold!

https://t.co/6whl3aEczn
While some young filmmakers whine about their passion getting butchered instead of growing a pair, here’s a young team that makes an interesting short about girls,women, cricket, CSK and liberation.What a https://t.co/dseipSKVrF very nicely done!

For this Karthick Naren replied as,

While everybody advised against it I had the pair to trust you & collaborate sir. In return we were treated like trash & made to invest on our own. I think its better to whine & confront instead of running away. Please don't do this to any other young filmmaker sir. It hurts! https://t.co/05b4v7eSXg

This twitter clash between two brilliant filmmakers left every movie enthusiasts in a deep upset.

Previous articleAmit Shah Just Told That BJP Karnataka Is The Worst Corrupt Party In The Whole Country : Confusions Of India
Next articleFacebook Knows Every Detail About You From Your Phone : Including This. ?? : WHAT THE FFFFF . . .

Report about a 16 year old transgender ending her life due to love failure has been making headlines. She who fell in love with...