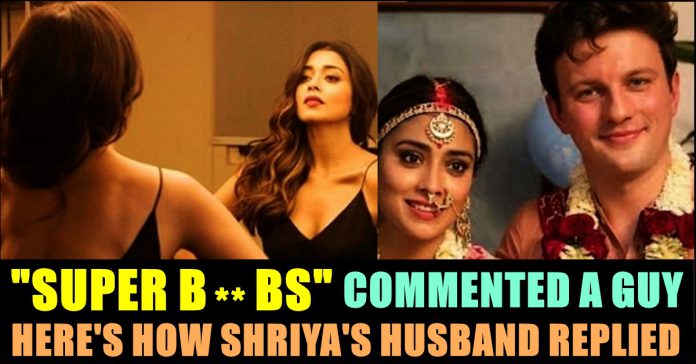 Actress Shriya who is known for pairing with top actors of Tamil cinema such as Superstar Rajinikanth and Vijay, got married to her Russian boyfriend Andrei Koscheev at her Lokhandwala residence on 12th of March 2018. The actress who is leading a peaceful life with her husband, went live on Instagram for the first time on his birthday. In the live, they both celebrated the birthday party with their followers.

Heroines interacting with their fans and followers through live in social media platforms is common nowadays, especially in this quarantine period. Fans of the individual would make use of the opportunity and will interact with them through sending texts. In this live session, Shriya happened to come across a weirdest comment and had her husband reacting to it.

Spead some love and happiness…. So I’m on @tiktok finally . shriyabeingfunny

As we all know, Internet is not a place to expect 100% of positivity. Amidst all the wishes and admirations towards the couple, one of a follower of the actress came up with a comment saying “Boobs Super” mentioning the “Shivaji” actress. Shriya who noticed the comment read it out loud and said “Idiots” to her husband. Andrei who making a juice, in a sportive manner said, “Yeah, I agree with you guys” to which Shriya laughed and asked her husband to stop.

“Whoever said that her boobs are “Super”, I agree with you. More comments about Shriya’s boobs please. Go on” he added. Shriya responded to it by saying “Disgusting people” and moved on to read the next replies.

Watch the video below from 4th minute :

About marrying Andrei, Shriya, in one of her recent interview said ““God has been kind and I’m blessed to have such a supportive partner like Andrei. I somehow like the word partner more than husband. Because Andrei is like my partner-in-crime, partner-in-fun and everything else. He’s really proud of me and my work. Whenever I’m stressed or worried about what I’m doing, he always tries to calm me down. He’s the best thing that’s happened to me and I’m loving every minute that I spend with him.”

Recently Shriya reported to media and said that her husband displayed symptoms of COVID 19 such as dry cough and fever. However when she reached hospital she was urged by the doctors to leave the place instead of providing him an admission. Shriya and Andrei returned to their home and self isolated themselves. “Thankfully he is better now. so I hope the worst is behind us” she said.

The actress was last seen in Simbu’s “Anbanavan Adangathavan Asarathavan” and her film “Naragasooran” is shelved as of now. She is expected to be seen in Sandakari with Vimal and Tadka post lockdown. Comment your views on this response of Andrei to that follower of his wife.

These 2 Female MP’s Getting Mercilessly Trolled For Their Clothes !! ATROCIOUS !!

Bengali actors and newly-elected MPs of Trinamool Congress Mimi Chakraborty and Nusrat Jahan faced ire on social media for their choice of clothing as...