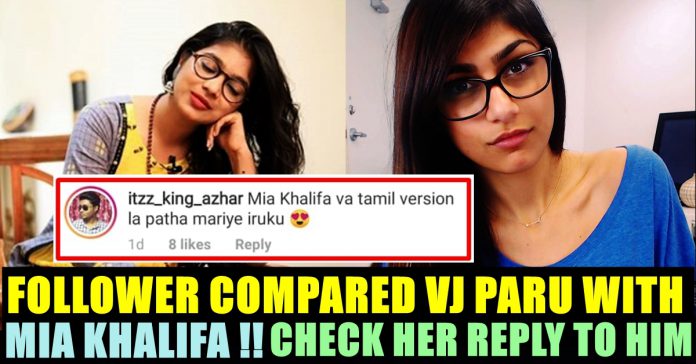 Fans storming into the comment section of a popular icon to pour their love is common. But it is very rare to see them getting a reply from their favourite star. VJ Parvathy of Galatta youtube channel who became overnight sensation through the way she hosts her shows, seems very much interactive to her followers and fans.

Recently she replied to one of her Instagram follower who termed her as Indian version of Mia Khalifa. The way she conducting public opinions impressed youth audience within a very short span. She initially rose to fame once music director, hero and filmmaker Hip Hop Aadhi told her that he “sighted” (local term used to define the act of gazing at the opposite gender) her in one of an interview.

The emerging anchor currently enjoying nearly 1 lakh followers in Instagram. In one of her recent post, she was seen wearing yellow tops and posed with closed eyes. “Too often, the Only escape is Sleeeeep. . P.S : But, you Guy’s know that I’m having insomnia” she wrote as caption in her post.

Parvathy who replied to almost everyone who commented, replied to this guy by asking him to leave her post in a light manner. “Irukkum. Irukkun… Poya Angittu.” she wrote to reply him.

Check out some of the replies provided by Paru to her followers in other posts :

Internet trolling is something which almost every celebrity in the world are going through in daily basis. Some won’t mind the trolls they are receiving but some will get offended and give it back to the trollers right away. But the way VJ Paru handling them makes her followers to love her more. One of her recent video for Galatta youtube channel is trending at 2nd place currently.

Comment your views on the way she replied to the trolls !!

A video of the post mortem process of Thoothukudi lockup victims Jayaraj and Fenix has been released by prominent journalist Nakkheeran Gopal. The video...

Followers of popular youtuber G.P Muthu found that he is going to spend his quarantine period to participate in the Bigg Boss show, hosted...

JUST IN : Dhanush’s First Message To Aishwarya Rajinikanth After Divorce!!

After separating with Aishwarya Rajinikanth, actor Dhanush came up with a tweet wishing her for her music video. In his tweet, Dhanush mentioned her...