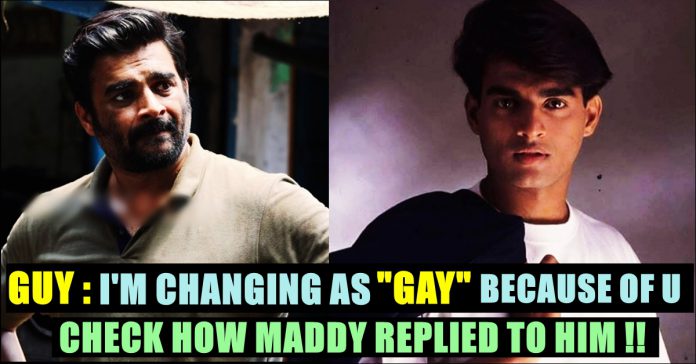 Actor Madhavan is very much active in social media platforms and setting it in fire by posting his throwback pictures. He has been described as one of the few actors in India who is able to achieve pan-Indian appeal, having appeared in films from seven different languages.

Recently, the actor posted one his old pictures in his official Instagram account. The post which has 23 year old Madhavan facing at the camera by wearing a round neck white tee. The 49 year old actor posted the picture with a witty caption saying “5000 years ago … 🙈🙈🤪🤪😄😄”

Many of his followers, especially girls loved this post of the actor and found it very much attractive which is evident through their comments. Meanwhile, one of a guy said that “he is not straight” anymore to express his love towards the picture of Madhavan.

the comment liked by as many as 195 people and grabbed the attention of Madhavan himself. Check out the screenshot of the guy’s comment below :

Maddy who is known for interacting with his followers in social media platforms, replied to him be saying “ha ha ha how cute…🙏🙏🙏”

Many of his followers said that the actor looks like his son Vedant in the picture. Check out some of the other replies from the actor for the various followers of him including for actress Shilpa shetty :

Bigg Boss show is keeping netizens busy in daily basis with atleast three promos and a show streaming time for 1 hour per day....

As polling began for the Lok Sabha elections in Tamil Nadu yesterday, Rajinikanth, Kamal Haasan, Ajith, Suriya and Karthi were amongst the initial voters...

“What If I Had A BMW Car??” – Emotional Words Of Mohana Sundharam, Swiggy Delivery Partner!!

Mohana Sundharam, a Swiggy delivery partner who is also running a stationary shop after working in a number of IT companies, appeared in an...