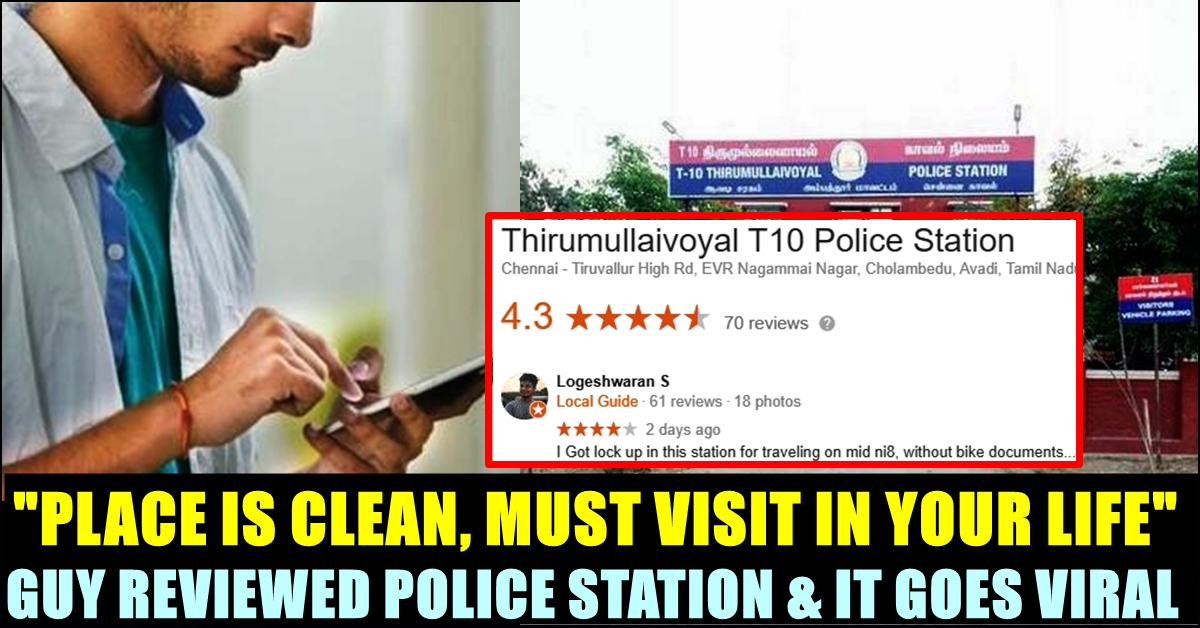 We couldn’t predict what’s going to go viral in this internet era. Few months ago, a single comment of a Tamil cinema fan in a Pakistan based civil engineering page’s post about Tamil movie comedy character Nesamani trended across the world. The hashtag #PrayForNesamani trended worldwide for two long days and made the one who posted the comment famous.

Now in a similar way, a youth identified as Logeshwaran has gone viral for his review in the google maps about Thirumullaivoyal T10 police station, located in Chennai. The youth claims himself as a “Local guide”, wrote the review of the police station in a way of reviewing a hotel or restaurant.

Logeshwaran who gave 4 star rating to the Police station mentioned the police officers as “Staffs”. Logesh who got detained for not carrying bike documents, says that the station was clean and located in main road. He even appreciated them for not harassing him.

“I Got lock up in this station for traveling on mid ni8, without bike documents…. station is clean and placed on main road… Staffs are very kind they didn’t treat any harrassment. They released me after collecting details and finger print without any bribery… Must visiting place in your life…,” wrote Logesh in his review.

Check out his review here :

As soon as he reviewed it, screenshot of the same went viral in social media platforms with hilarious captions. Check out some their reactions below :

A TripAdvisor style review of a Police Station in India 😳 pic.twitter.com/acQKzj0GpK

Too much. Regular offenders would love to see these ratings, I mean they will decide which area police station lock up they prefer 😂😂😂😂😂😂

This guy is really a legend .. giving review for a police station 😬 pic.twitter.com/jbexvPxRBh

Followed by this comment of Logesh, many started reviewing the police station and rated it highly for his experience.

What do you think on the review provided by Logesh for Thirumullaivoyal police station ?? Comment your views below !!