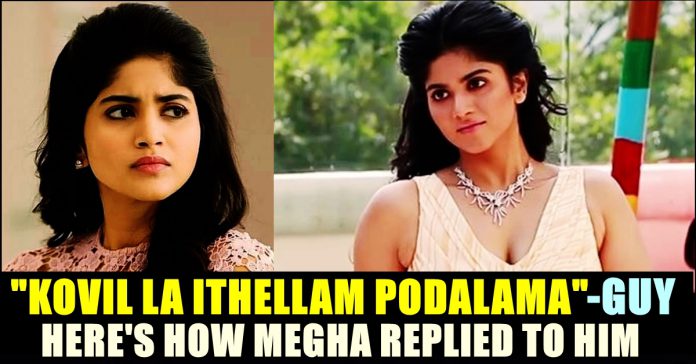 Mega Akash debuted in Kollywood industry with Rajinikanth’s Petta in which she paired with actor Sanath. Within a short span of time, the actress impressed vast number of fans which is evident in her social media accounts. She enjoys more than 16 lakh followers in the photo posting social media site Instagram.

Internet bashing is something which almost every celebrity who are owning a social media account are facing in daily basis. Some won’t mind and would avoid reacting to the trolls they are receiving but some will intend to teach a lesson to the troller and will let them taste their own medicine.

Coming back to Mega Akash, the actress is very much active in social media platforms, especially in uploading pictures from her photoshoots. Recently, the “Vantha Rajava Thaan Varuven” actress posted a series of pictures of herself from an abandoned place. The pretty actress was seen in a brown attire and advertised a showroom in her posts as well.

Beauty begins the moment you decide to be yourself ❤️ …. Refresh your wardrobe for the new year with the SHEIN Year End Sale! Grab the hottest styles at Up To 85% Off now! Use my code AMH10 for extra 10% off entire site of www.shein.in or SHEIN APP. (Coupon code valid till 31st Jan.)

Beauty begins the moment you decide to be yourself ❤️ …. Refresh your wardrobe for the new year with the SHEIN Year End Sale! Grab the hottest styles at Up To 85% Off now! Use my code AMH10 for extra 10% off entire site of www.shein.in or SHEIN APP. (Coupon code valid till 31st Jan.)

To this post, one of her follower questioned about her clothes by commenting “Kovil la ipdi la dress podlam ah” to which the actress simply replied “It’s not a temple”

As soon as the actress replied, the user deleted the comment it seems. On the professional front, Megha Akash who was last seen in Enai Nokki Paayum Thotta, is all set to be seen in “Yaathum oore Yavarum Kelir” in which she is going to pair up with actor Vijay Sethupathi.

What do you think on people commenting on the clothes of individuals, that too in their personal account ?? Comment your views below !!

Followed by India's terrific bowling performance against English batsmen in the first innings, a number of former England players came up with tweets blaming...

Tamil Bigg Boss went past 30+ days and the most controversial contestants of the house such as Vanitha Vijaykumar, Meera Mithun. Mohan Vaidhya got...