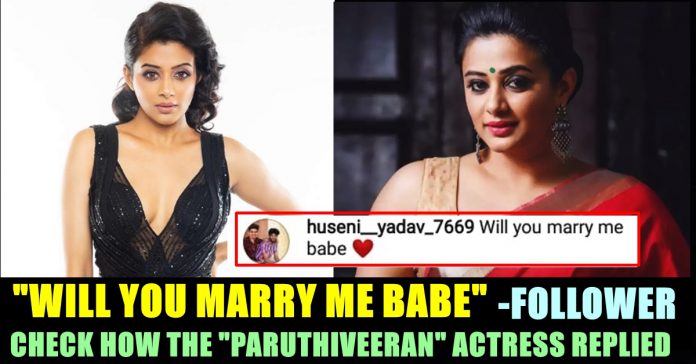 People searching for their life partner in online medium is not something new in this digital era. We have seen a number of successful couple who have ended up marrying each other after meeting virtually in a random social media platform. Celebrities who are associated with Television and cinema industries receiving marriage proposals in online platforms has increased in a vast number as well.

Among the many heroines who have received marriage proposals online, now actress Priyamani who rose to fame among Tamil audience through “Paruthiveeran” of director Ameer, came across a follower who proposed her. The actress also gave him a reply which grabbed the attention of her followers and media outlets.

Priyamani made her acting debut through Evare Atagaadu, a telugu film released on 2003. She gained widespread recognition for her role as village girl Muththazhagi in the Tamil romantic drama Paruthiveeran in 2007, directed by Ameer. She received a National Film Award for Best Actress and a Filmfare Award for Best Actress in Tamil for her performance in the film which also marked actor Karthi’s debut..

Her notable works include Raam, Raavan, Raavanan, Chaarulatha and Idolle Ramayana. After acting in a film named Chaaru latha in Tamil, Priyamani started concentrating on Malayalam and Kannada films. She is also pretty much active in social media platforms and is engaging her followers by uploading pictures from her photoshoots.

She is currently enjoying 1 million followers in Instagram and has uploaded 827 posts. Check out some of her recent posts below :

Most recently, she uploaded a picture of herself from the Filmfare award function. “Women who wear black lead colourful lives ….Last night for the Filmfare Awards wearing @houseofneetalulla” read the caption of her post.

Replying to this post, a follower named Yadav proposed the actress to marry him by writing “Will you marry me babe ❤️”

Without losing her nerves or blocking the user, Priyamani replied to him saying that she has no problem in marrying him but wanted him to get permission from her husband. “I don’t mind but ask permission from my husband first…if he says yes then I’ll gladly marry you” her reply read.

On 23 of August 2017, Priyamani married Mustafa Raj, an event organiser, in a private ceremony. The actress also uploaded a number of pictures of themselves in her official Instagram account.

Cinema celebrities in India who entered the industry with their father or God father's influence are being treated with so much hatred for fast...