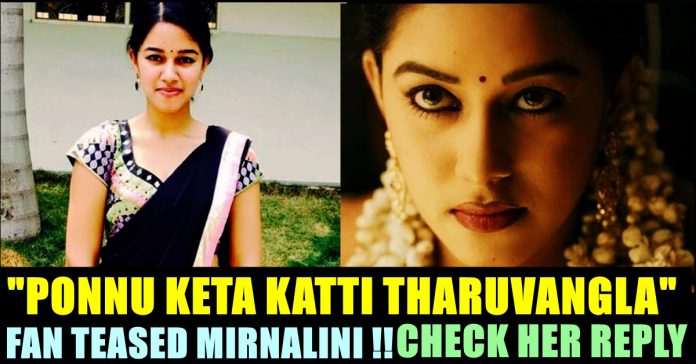 Celebrities conducting chat session through their official social media accounts to interact with their fans and followers is common nowadays. They find it easy to keep their fans engaged in this way rather than meeting them in person and to spend time with them with photograph sessions. They can also avoid the absurd questions asked by few fans who intend to troll or criticize.

Mirnalini Ravi, a popular Dubsmash artist who debuted into Kollywood through Thiagaraja Kumararaja’s Super Deluxe, has conducted a chat session with her fans through her official Instagram in which she enjoys more than 5 lakh followers. In the chat session, Mirnalini answered to many kind of questions from her fans.

-ALIEN👽 from SuperDeluxe -BUJJAMMA👩🏻 from Valmiki aka Gaddalakonda ganesh -SANA🧕🏻 from Champion Couldn’t have asked for a better year ❤️🙏🏻 #THANKFUL 2019 ! #bestmemory

In the movie Super Deluxe alongside Vijay Sethupathi and Samantha Akkineni. In the movie Mirnalini appeared in a character of an Alien from another universe. This is the first time in a Tamil film, a character of an Alien featured. After this Mirnalini appeared in a Telugu film named as “Valmiki” which is a remake of Tamil blockbuster “Jigarthanda”.

In the film Mirnalini reprised the role of Lakshmi menon opposite to Atharvaa who played the role of Siddharth. Her recent release in Tamil is “Champion” directed by Suseendhiran. In the chat session conducted by the Mirnalini, she answered to one of a fan who asked her about marrying her.

The fan asked the actress whether her parents would allow to marry her if he asked them. “Unga vitla ungala ponnu keta kati tharuvangla” the fan wrote in his question to Mirnalini to which she answered in a positive way by writing “Oh Yess” with laughing emojis.

Check out screenshot of her answer here :

Followed by this she answered to many other questions of her fans. Most of them asked the actress about the secret behind her glowing skin. Check her answers below :

On the profession front, Mirnalini is about to appear in Sasikumar’s MGR Magan in which Sathyaraj also going to play an important role. Comment your views on these answers made by the emerging actress !!

Previous articleSri Lanka’s President Revealed What Happened To 20,000 Missing Tamils !!
Next articleThis Talented Hero To Act As Villain In Mankatha 2 ??

As a response to the enormous amount of trolls and criticisms that the teaser of "Adipurush" is receiving, top VFX company "VFX Waala" that...