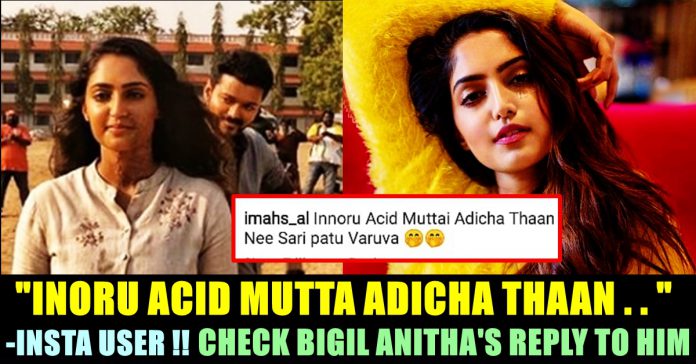 Guy Posted Negative Comment On BIGIL Anitha’s Picture !! Check What She Did !!

Apart from Vijay, Nayanthara and Jackie Sheroff, the film also had 11 girls as football players. Indhuja Ravichander, Amritha Iyer, Varsha Bollamma, Reba Monica John are few of them who grabbed the attention of the audience. After the release of the movie almost every girl who acted as players got wide attention from the audience.

Reba Monica John was debuted in Tamil film industry as a heroine in actor Jai’s Jarugandi movie. In Bigil she played the role of a acid victim who succeeds in what she aimed, despite of the struggles she faced due to her appearance. The character Reba played was highly appreciated by wide range of audience as it encouraged many girls to do what they are wishing to achieve.

After essaying the role of Anitha, Reba became very much active in social media platforms by interacting with her followers. Having more than 4 lakh followers in Instagram, Reba recently posted a series of pictures of herself in her official Instagram account.

While adding the post, Reba added a caption saying “Is it my brothers photography skills or just his new OnePlus camera 😏🙌💥 I WONDER . P.S had to beg and plead to get these pictures clicked soooo let’s appreciate”. Check out her post below :

Is it my brothers photography skills or just his new OnePlus camera 😏🙌💥 I WONDER . . . P.S had to beg and plead to get these pictures clicked soooo let's appreciate @_shanejohn_ gaiss 🥴 Also lots of love to my insta fam! ❤️ #homesweethome #memyselfandi #weekend

On seeing this picture, many of her followers lauded it and appreciated her performance in Bigil movie. As we all know, Internet is a place where we can’t expect positivity everytime as there are few trollers and abusers are always waiting to spew hatred. One of a follower, posted a vicious comment on the post of Reba by saying that she needs to get attacked by another acid egg. “Innoru Acid Muttai Adicha Thaan Nee Sari patu Varuva” said the comment of the Instagram user.

Other followers of the actress asked the actress to ignore such comments to which Reba replied by saying that the user was blocked already.

What do you think on the way Reba handled the abuser !!

Previous articleFormer IIT Professor Slammed Caste Based Educationalists !! WATCH !!
Next articleSamantha Replied To Those Who Questioned About Her Pregnancy !!

Ravindra Jadeja who is fondly called as "Sir" Ravindra Jadeja by the fans of cricket, grabbed the headlines through his terrific performance in the...