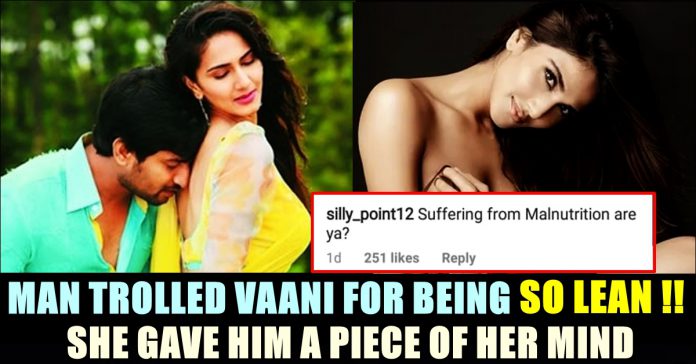 Random Instagram user made an unnecessary comment on the post of actress Vaani Kapoor to which the actress immediately replied to him in a way of giving him a piece of her mind. Vaani Kapoor is an Indian actress known among Tamil audience for acting in 2014 romantic comedy Aaha Kalyanam. In the film she paired opposite to actor Naani. Though the film didn’t do well in box office, Vaani Kapoor became a familiar face among Tamil cinema fans through her social media existence. She is one of the many actresses who is very much active in social media platforms, especially in the photo uploading app Instagram.

Having more than 30 lakh followers in Instagram, Vaani Kapoor has posted 642 posts in her Instagram account so far. Being an actress, she always posted pictures of herself from various photoshoots with different attires. Many of her Instagram posts were lauded by her followers for the way she carries herself in those attires. In a similar way, a recent Instagram post of her had herself clicking a mirror selfie.

She was seen wearing a gym outfit and the caption of the post confirmed that the actress is about to work out. “🔙 to the grind ✔️” read the caption of Vaani Kapoor’s post.

The post received more than 2 lakh hearts within a day and more than 1000 people commented on it. A guy whose Instagram handle name read as “silly point” also commented on the post of the actress. On seeing the actress being lean in the picture, he asked “Suffering from Malnutrition are ya?”

This comment received more than 200 likes and didn’t miss to grab the attention of Vaani Kapoor. She decided to school the guy and replied to him by writing “why don’t you find something productive to do in life ??? Please stop being harsh on yourself. Life is so much better.. stop reflecting hate”

After getting a reply from the actress, the guy deleted his comment it seems. Check out the screenshot of their interaction here :

Vaani Kapoor was recently found herself in a controversy for posing with an attire which had written “Ram” on it. The post which was removed by the actress immediately after the widespread outrage it received. It made a Mumbai based man to register complaint about it in police station. In the picture, Vaani Kapoor was seen wearing a blouse which had the name “Ram” written on it in Hindi. The complainant Rama Sawant who is an ardent devotee of Lord Shri Ram, filed complaint in Mumbai’s NM Joshi Marg police station and the Mumbai police commissioner alleges that Vaani has hurt religious sentiments with her revealing outfit. (Also Read : Vaani Kapoor’s Hottest Post In Instagram Landed Her In BIG TROUBLE !!)

Deputy Chief Minister Mr. O. Pannerselvam announced the state budget of 2018-19 in the assembly today. This is the first budget announcement after the...