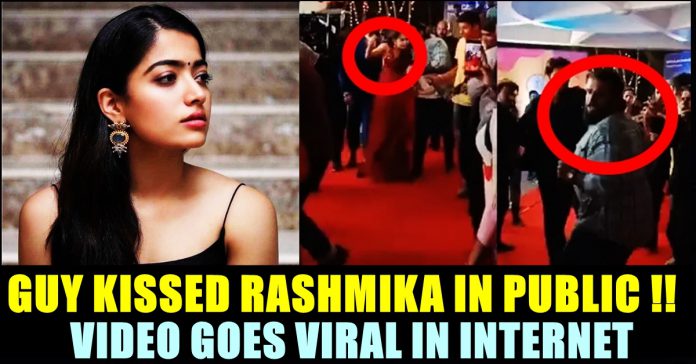 Celebrities attracting wide audience for their public appearance is not something new. Many fans would try to take pictures and autographs with them to make the moment as a memorable one. Now, in such incident, a fan trying to kiss a popular actress has grabbed the headlines in several media portals.

Not many days ago, video of a fan trying to kiss Sara Ali Khan went viral in social media platforms. Now, in a similar way, one of a fan kissed actress Rashmika Mandanna on cheeks and ran away. The video shook the fans of the actress and is doing rounds in Internet with various kind of reactions.

Rashmika Mandanna is one of the very few actress who got fame and place in the hearts of many fans in a very short time span. Despite being part of very few films, the number of fan pages in social media for the actress is sky level. The Geetha Govindam actress is one of the first candidate who believed to be paired with actor Vijay in “Bigil” but Nayanthara grabbed the role and the film is running successfully in theatres now.

Rashmika Mandanna who rose fame to Tamil fans through the song “Inkem Inkem” song from Telugu “Geetha Govindam” is very much popular among Tamil fans for the fan pages she enjoys. Rashmika is also known for her friendly attitude and for the way she interacts with her fans in social media platforms. This kind attitude of the actress got her into trouble as the the actress has been harassed in a private event in which she gave her presence.

While exiting from the event with body guards, as usual fans of the actress rushed and forced her to pose for their selfie pictures. Meanwhile, a fan who had the courage to bully the actress, kissed her in the cheek forcefully and ran away while body guards tried to catch him. Rashmika who didn’t expect it, got shocked and stood still. However, she continued to smile.

Netizens who saw this video, started reacting to it in various ways. Many of them expressed their frustration over the fan for harassing Rashmika. The actress who was last seen in Mahesh Babu’s Sarileru Neekevaru is going to debut in Tamil through a film in which actor Karthi is playing the lead. Bangalore Times placed her first place in the list of ’30 Most Desirable Woman of 2017′. She is one among very few actresses to enter Tollywood’s ₹100 crore club in a short span.

What do you think on this behaviour of the fan ?? Comment your views !!

Director Parthiban, "Iravin Nizhal" of whom got released recently, is currently busy promoting the film by visiting theatres and being active in social media...

The controversial blame game between Bigg Boss fame Tharshan and popular model Sanam Shetty is continuing after the press meet provided by Tharshan amidst...